Radu Lupu in the Tonhalle, Zurich 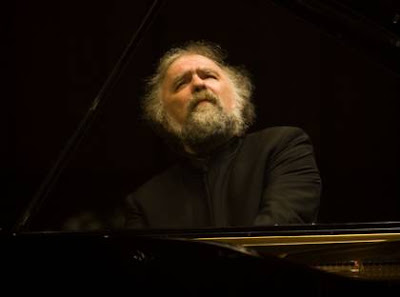 Talking or writing about music is difficult. Describing a painting is one thing, but how does one even start to describe a Beethoven piano sonata? Frank Zappa is reported to have said, or was it Elvis Costello: “Talking about music is like dancing about architecture.” Regardless of who said it, and it might even have been Frank Lloyd Wright, or Martin Mull (Martin who?) or even Clara Schumann, it does summarise the difficulty adequately.


Writing on music tends to be either overly technical or a list of similes. Very few can manage to do it well. Alas, I am inept. And this is a pity, because on Sunday night I experienced a musical evening that was unforgettable – indeed the music resonated so deeply that hours after the concert it still wouldn’t leave my mind and kept me awake. Unfortunately I can’t describe architecture very well by dancing and I cannot share the music by writing about it.

The recital was by the great Romanian pianist, Radu Lupu, performing Janacek, Beethoven and Schubert in Zurich’s Tonhalle. During Lupu’s interpretation of Beethoven’s “Appassionata” Sonata I felt he was close to unfolding a sound picture that would manifest a truth, but one which does not lend itself to translation into words. Perhaps for this reason Lupu plays the piano, and seldom if ever gives interviews. He sat before the magnificent grand piano looking utterly relaxed, his fingers barely touching the keys, like an ancient Hindu sage sending out messages of wisdom encrypted in music. Schubert’s Piano Sonata in B Flat is one of my favourite pieces of music. Radu Lupu seemed to play it, not with his fingers, but with his being. There was an extraordinary lack of intensity in his approach; instead, with little outward demonstration of effort, he offered the lightness of the Zen master. He was in such command of his instrument that, ironically, the effect was that Radu Lupu himself was erased and the music alone was revealed.

At the end of the concert he bowed, and left the stage, returned, bowed, and left again. As the applause grew louder he returned to the stage, bowed, sat before the piano and immediately began to play again – the first of two encores. The second encore was one of Schubert’s Impromptus, but though I recognized the first, or at least seemed to, I couldn’t quite place it, and have failed to identify it since. To call it incredibly beautiful would be an understatement. It was perfect.

If any reader happened to be at the concert and knows which piece it was, I would love to know.
Posted by P. M. Doolan at Tuesday, May 11, 2010