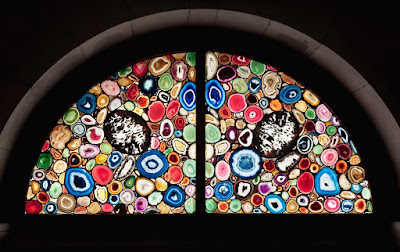 Writing in the New Yorker magazine two years ago Peter Schjeldahl referred to German artist Sigmar Polke as one of the two best artistic painters in the world (the other being the equally German Gerhard Richter). Now Polke has returned to an art form in which he trained as an apprentice over fifty years ago – stained glass.

The art of stained glass is an art form that gets better the further you go back in time, the inverse of progress, until you reach the great Gothic cathedrals of France, especially Chartres. A number of Victorians, like Pugin, tried to revive the craft but could not solve the mystery as to why the medievals could outperform the moderns. But today’s Zürich is gradually becoming something of a Mecca for the traveler in search of contemporary church stained glass art. Both the Grossmünster and the Fraumünster cathedrals, just a few steps from each other and flanking opposite sides of the river Limmat, have beautiful windows designed by Augusto Giacometti, while the Fraumünster has become a must see for visitors because of its four windows designed by Marc Chagall. Now the Grossmünster has been enriched with twelve exquisite windows by Sigmar Polke.

The site of the Grossmünster has been a place of Christian worship since the late 3rd century. Charlemagne ordered that a great church be built on the spot in the early 9th century. The present Romanesque building dates mainly from the 13th and 14th centuries. It was while being a priest at the Grossmünster that Ulrich Zwingli initiated the Reformation in Zurich during the 1520s. In a word, this is a site with history. 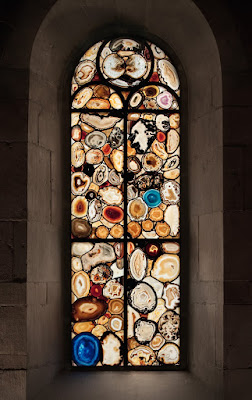 Polke, a post-modern anarchist if ever there was one, has succeeded in producing a miracle of luminosity that combines originality with a deferring bow to tradition. He has given the western half of the church seven windows where the glass has been impregnated with thin slices of agate. In other words, he has daringly covered the window spaces of this squat and dark stone church with yet more stones – stones far older than the stones of the walls themselves. The agate stones, which are of course millions of years old, are arranged like translucent mosaics joined by strips of lead and have been treated with pigments to ensure an almost alchemical transformation. I have been in the church at three different times of the day and the effect of the light is always changing but equally stunning. The ribbed lines within the stone are exposed and recall the magnificence of the deep, geological past, symbolizing in a completely abstract and contemporary manner the creation of the earth itself. Yet the effect also reminded me of modernist painters, like Gustav Klimt. The Byzantines and the builders of the Gothic cathedrals of France sometimes used stone within their stained glass, but never quite like this. 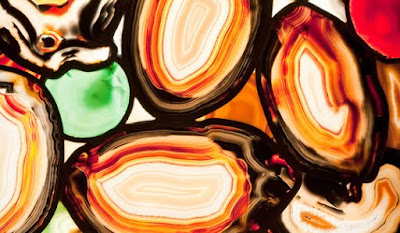 Polke has added seven windows in the east of the church with figurative images taken directly from medieval manuscripts and depicting scenes from the bible. Thus we pass from geological time – the time of creation, to biblical time – the time of humans. Polke’s work thereby configures a great axis of time. His references to medieval manuscripts inevitably draws a comparison with his oft used technique in his paintings of quoting texts and images from contemporary culture. 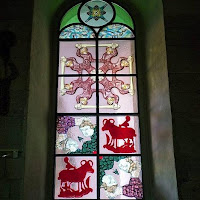 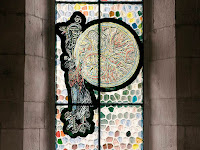 One of the most acclaimed artists of our age, as a young man Sigmar Polke worked for a short time as an apprentice in a stained glass factory. Now he has returned to his roots and transformed the Grossmünster into an ever changing event of luminous colour.


For more on stained glass windows see my post on Edward Burne-Jones.


Note: it is not permitted to take photos in the church.  All photos reproduced here come from a press kit released by the Gossmunster.
Posted by P. M. Doolan at Sunday, March 14, 2010