Dada is Born: Part One

Here is part one of an essay on the birth of Dada.  I'll upload part two tomorrow. 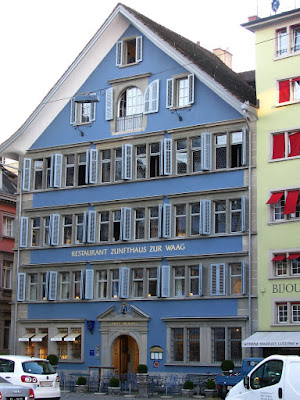 
The grand guildhouse Zunfthaus zur Waag doesn’t look like a likely site for staging a revolution. It stands on the Münsterhof, a prestigious medieval square just a stone’s throw from the financial heart of Zürich.  On July 14th 1916 a collection of young poets, writers and artists came together here to enjoy an evening of music, poetry, painting, and dance with fantastic masks and costumes.  While in other corners of Europe the dying world of the 19th century was being dismembered in the bloodiest battles ever seen, in this quiet Swiss backwater the crazy, playful world of Dadaism had burst forth, and, for better or for worse, the anti-art of conceptual art was born.
Dada was to a large degree the child of the German poet Hugo Ball, and his partner Emmy Hennings. Born in Germany in 1886 Ball had become absorbed by the ideas of Nietzsche while at university. Leaving before finishing his dissertation, he threw himself into the world of avant-garde theater in Munich and Berlin.  In 1913 he met Hennings at the famous Café Simplicissimus.  She was a singer and dancer and, a year older than Ball, more experienced in many ways.  She had a child from a previous marriage and a string of ex-lovers in the German art world; she had traveled in Eastern Europe and had done a term in prison.  She used drugs and introduced Ball to the delights of narcotics.

When war broke out in 1914 Ball had volunteered for the army but was turned down on medical grounds.  He then traveled to Belgium and witnessed the carnage inflicted upon men by mechanized warfare.  What he saw appalled him and he and Hennings began to actively oppose the war.  In 1915 they arrived in Zurich on false passports.
Zürich during the war had become a haven for international revolutionaries, pacifists, artists, writers and contraband criminals. The city's foreign population included James Joyce, Stefan Zweig and Vladimir Ilyich Lenin. Like most migrants, Ball and Hennings lived and worked in the warren of alleys that make up the Niederdorf quarter of the city.  This was an area where no self respecting Swiss burgher would want to be seen, notorious as a cesspool of alcoholism, drug addiction, indecency, crime and venereal diseases.  Seven out of every ten buildings housed a bar or club where dancing girls, unusual animals, dwarfs, fat ladies and other “freaks” were on offer. The couple moved every few months, constantly pursued by a gnawing poverty. At one point Ball was imprisoned for twelve days for having a false passport. By August 1915 the couple had become destitute, sleeping rough and forced to scavenge for food.  Then Ball found employment as a pianist with a vaudeville troupe in Basel while Hennings worked in the Niederdorf quarter as a singer and dancer in a variety show.  According to Zürich police records, she subsidized her morphine habit with prostitution.
In early 1916 Ball returned to Zürich and in February he rented a small room adjacent to a restaurant in a dark alleyway, Spiegelgasse 1.  (Russian Bolshevik revolutionary Vladimir Ilyich Lenin moved into a room a few yards further up at Spiegelgasse 14 in mid-February).  On February 5th they opened this space as a new club for young artists and performers.  They called it Cabaret Voltaire.  From February until July this dark premises hosted loud, smoke-filled evenings of noise music, simultaneous poems, mystical incantations, Russian balalaika bands, songs in Danish, verses in Rumanian and bizarre dances in grotesque masks and outlandish costumes. The works of friends – Arp, Picasso, Modigliani, Marinetti, and Macke, decorated the walls. Ball and Hennings were joined, as ‘core’ members of the group by 20 year old Tristan Tzara, a confident and witty Rumanian poet, 21 year old Marcel Janco, a quiet, friendly Rumanian who made paintings, posters and cubist masks, Richard Huelsenbeck, a 24 old argumentative German doctor and poet with an interest in the rhythms of music and language, 29 year old Hans Arp, from Strasbourg, a talented visual artist of some reputation and 27 year old Sophie Taeuber, an innovative local artist, set designer and dancer. Arp has left us a description of what it was like:
“Total pandemonium.  The people around us were shouting, laughing and gesticulating…. Tzara is wriggling his behind like the belly of an Oriental dancer.  Janco is playing an invisible violin and bowing and scraping.  Madame Hennings, with a Madonna face, is doing splits.  Heulsenbeck is banging away nonstop on the great drum, with Ball accompanying him on the piano, pale as a chalky ghost”. 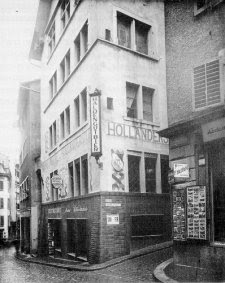 According to Ball, what they were doing was “reminding the world, across the war and other fatherlands, of those few independent spirits that live for other ideals.”  What those ideals were exactly was hard to capture in words.  Tzara wrote: “I am against systems, the most acceptable system is on principle to have none.  To complete oneself, to perfect oneself in one’s littleness, to fill the vessel with one’s individuality, to have the courage to fight for and against thought, the mystery of bread”.  Certainly the Dadaists valued spontaneity over reason, anarchy over order, freedom over harmony.

Ball and Hennings were convinced pacifists by this time. All of the Dadaist shared a repulsion of the war.  As Arp expressed it:  “Revolted by the butchery of the 1914 World War, we in Zürich devoted ourselves to the arts.  While the guns rumbled in the distance, we sang, painted, made collages and wrote poems with all our might.” In late February the German army commenced its attack on the French at Verdun, a battle that would kill 700,000. A few nights later Hugo Ball sat at the piano in Cabaret Voltaire, surrounded by friends from most of the warring nations and played Debussy’s “Berceuse Heroique”. The French composer had written this work to honour the people of Belgium for their heroic resistance to the Germans in 1914. Now Ball, a German national, could not have defined himself more clearly as an opponent of German nationalism.