David Zinman and the Tonhalle Orchestra in Zurich 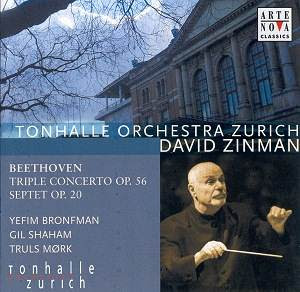 I was pleased to see an article from Hugh Canning in The Times last week praising Zurich's Tonhalle Orchestra.  While criticising the pervasive tendency of ranking the best orchestras of the world, as if they are in some sort of beauty contest, he does claim that: "Among the historic symphonic ensembles of Europe, the Tonhalle Orchestra of Zürich is perhaps the one whose profile has risen most spectacularly in the past decade or so."  This is in no small measure due to the leadership of the orchestra's conductor and musical director David Zinman.  He is perhaps most famous for what some, including myself, consider to be THE classical musical recording of the 1990s - Gorecki's Third Symphony, conducted by Zinman, played by the London Sinfonietta with Dawn Upshaw. The languorously beautiful but heartbreakingly sad melodies, combined with Upshaw's voice, with its depth of feeling, have made this a bestseller. Since then Zinman has raised the Tonhalle Orchestra's reputation worldwide.  Their recordings of all of Beethoven's symphonies have sold more than a million copies and this year will see the completion of their releases on CD of all of Mahler's symphonies - the 8th has just been released.  Last month Zinman and the Tonhalle Orchestra performed all of Brahms' symphonies live in the Tonhalle (Brahms himself once conducted the Tonalle Orchestra) and these live concerts were recorded for release in the near future. As well as becoming a major player in the world of classical CDs, Zinman and his orchestra are in high demand all over the world at major festivals, such as the Royal Proms last year.

A couple of months ago my wife and I attended a concert at the Tonhalle of Wagner's Act One of Die Walkure.  Zinman and his orchestra were in tremendous form and even Esther, most definitely NOT a Wagner fan (in an act of great selflessness, she had bought the tickets as a gift for me), was bowled over.  But I was worried as Zinman is 74 years old and his contract ends this year.  I was pleased to read that he has just signed a new contract, which will keep him at the helm until the tender age of 79.  Surely that is a clear demonstration of a man who loves his work.  It makes me wonder, will I still want my day job if I live to 79?
Posted by P. M. Doolan at Saturday, May 08, 2010