On no! Heidi's Daddy was a German

Well, it seems like disaster has well and truly hit Switzerland this time. Heidi may have had a German father! This will certainly provide more fodder for the anti-German antics of the leading Swiss xenophobic political party, the Swiss People's Party (SVP). Riding high after their successful campaign to ban minarets, the SVP turned their sights on the growing German population in Switzerland, focusing especially on Zurich's universities. They have tried to initiate a campaign that would lead to placing a ceiling on the number of Germans who may be employed as lecturers and professors (despite the fact that there aren't many unemployed Swiss professors).  And now, irony would have it, it is a German scholar at the University of Zurich who has discovered a story published in German by a German author fifty years before Johanna Spryi's novel Heidi appeared, which bears a remarkable resemblence to the world famous Swiss novel.  But no, surely the Germans can't rob the Swiss even of this; after all, as one commentator said: "Heidi is Switzerland and Switzerland is Heidi." It has been a year of disasters for poor Switzerland - a diplomatic war with Libya in which Ghaddafi kidnapped Swiss citizens and continues to humiliate the Swiss government; the great UBS bank, biggest of the big, loses billions while its criminal behavior in the US gets compared to that of the mafia; the banning of minarets calls up a storm of protest from around the world.  Poor misunderstood Switzerland.  But at least we had Heidi.  Now they are stealing her from us. 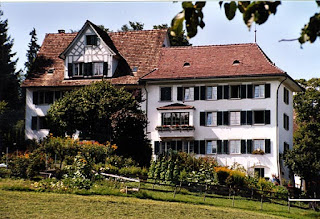