Having written recently about my first encounter with Hermann Hesse's Siddhartha, I decided to undertake a pilgrimage to Lugano, to visit the place where Hesse wrote his masterpiece and where he now lies buried. Lugano is a mixture of old worldly Italianate charm and modern brazenness, breathtaking mountain views and genteel private banks that are outnumbered by the purring Ferraris that graze near the lakeside promenade. Hesse lived from 1919 until his death in 1962 on the outskirts of the town, in what was then the simple village of Montagnola.  Near the entrance to the village one finds the ancient church of Saint Abbondio. 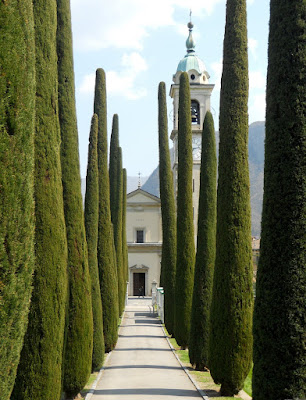 Across the road from the church I found the small sun drenched cemetery. It didn't take long to find his grave. He lies here with his wife, Ninon Auslander. Luckily, as you can see from the photo, his plot includes a stone slab and I accepted its silent invitation and sat here for twenty minutes or so in the April sunshine. I then penned him a note and tucked it beneath one of the pebbles on the floor. 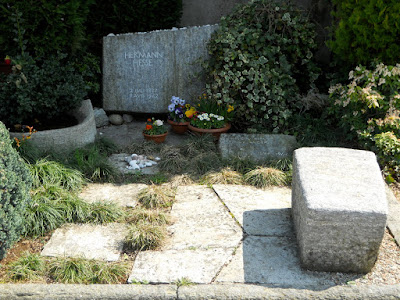 A thirty minute walk, though woods and past mansions of foreign multi-millionaires, drawn here, not by the pleasant climate or the literary connections, but by its discrete distance from the tax authorities back home, brought me to the village centre and this delightful pallazo. From 1919 until 1931 Hesse, who had left his wife and three children, lived alone in four small rented rooms in this complex. 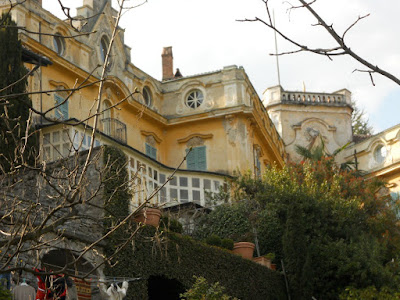 Here in the Casa Camuzzi he wrote Klingsor's Last Summer, Siddhartha, and large parts of Steppenwolf and Narcissus and Goldmund. He wrote of his time here:
"I was now a little, penniless man, a threadbare and rather dubious stranger who lived on milk and rice and macaroni, who wore his old suits until they were threadbare and in autumn brought home his supper of chestnuts from the forest... And so I lived for a dozen years in Casa Camuzzi; garden and house appear in Klingsor's Last Summer and in other of my compositions.  Dozens of times I have painted this house and drawn it and probed its complex, whimsical forms... it housed a whole lot of other tenants, but none stayed as long as I have and I believe none loved it more".

It is today privately owned, but the small Hermann Hesse Museum is housed next door, where one can see , among other relics, the typewriter with which he typed these masterpieces. 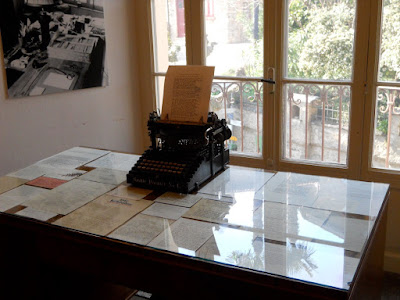 And in one display case, flanked by a small statue of Buddha, I found this limited first edition of Siddhartha from 1922. 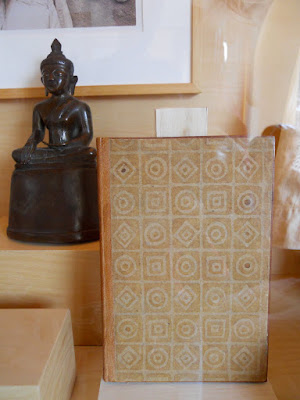 I couldn't help but think that the contents of this book are of immeasurably more value then the contents of all the private banks of Lugano.
Posted by P. M. Doolan at Friday, April 30, 2010