This is part two of an essay on the birth of Dada.  Part one appeared yesterday.  I will post part three tomorrow.
The evening of March 31st in Cabaret Voltaire saw the first ever performance of “simultaneous poems” when three unrelated texts were chanted at the same time in three different languages, Huelsenbeck in German, Tzara in French and Janco in English.  As if the audience had not been baffled enough, this was followed by Tzara and Huelsenbeck’s ‘Chants Nègres’, in which they recited African poetry, in their versions of the original languages, to the uncomprehending audience, accompanied by Huelsenbeck’s rhythmic drumming.  The next couple of months saw a number of ‘Dances Nègres’, involving violent contortions of the limbs by dancers dressed in bright costumes of geometric forms and Janco’s astonishing cubist masks. African “primitiveness” had become a weapon to be used in a full frontal assault on the enemy – the imperial western tradition of beauty and reason. 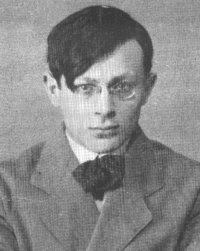 Tristan Tzara
In April Tzara convinced the others that they should produce a regular journal.  On April 18th Ball noted in his diary “My proposal to call it ‘Dada’ is accepted (…) Dada is ‘yes, yes’ in Rumanian, ‘rocking horse’ and ‘hobby horse’ in French.  For Germans it is a sign of foolish naiveté, joy in procreation, and preoccupation with the baby carriage.”  This is the first ever mention of the word “Dada”.  Most agree with Ball that it was he, together with Huelsenbeck, discovered the word by plunging a knife into a German-French dictionary, though Tzara would later claim that it was he alone who had invented the word in Café de la Terrasse.  Ball later added in his diary, “What we call dada is (…) the death warrant of posturing morality”.
In May most of Ball’s energy was taken up with editing the one and only edition of the journal Cabaret Voltaire. In June 500 copies were printed by an anarchist printer, Julius Heubeger. As well as contributions from Zürich’s Dadaists, it included work from a number of the leading lights of the European avant-garde - Picasso, Marinetti, Kandinsky, and Guillaume Apollinaire.  The editor’s notes included the statement that the work should not be interpreted along national lines and that the editor emphatically rejected the “German Mentality”.  There followed a list of contributors with their nationalities – Spanish, Russian, French, Rumanian, Italian.  Last was Emmy Hennings’ name:  her nationality was listed as “Homeless” (“Heimatlos”). This at a time when patriots of various nationalities were urging their compatriots to ever greater feats of human slaughtering.
In late June 1916 Ball recited the first of his famous ‘sound poems’. While Kandinsky had recently abolished images from his art, and consequently had invented abstract painting, Ball now abolished language from his poetry. It was an attempt to reach to the depth of primitive being and utter mantra like, pre-articulate, magical sounds. Clad in a cylindrical costume that he had made himself out of shiny, blue cardboard, he appeared like an obelisk with wings and claws and a shaman’s hat.  The costume was so heavy he had to be carried onto the stage.  He began the poem that opens with the lines:
gadji beri bimba
glandridi laula lonni cadori 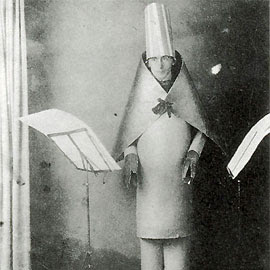 Dada's Magic Bishop - Hugo Ball
Gradually his chanting took on “the ancient cadences of the priesterly lamentations” in the style of “the mass hymns that fill the Catholic churches of the Orient and Occident with sorrow”.  That evening he recorded in his diary how, for a moment “it seemed as if there were a pale, bewildered face in my cubist mask, that half-frightened, half-curious face of a ten year old boy, trembling and hanging avidly on the priest’s words in the requiems and high masses in his home parish.  Then the electric lights went out, as I had ordered, and bathed in sweat, I was lowered off the stage like a magic bishop.” 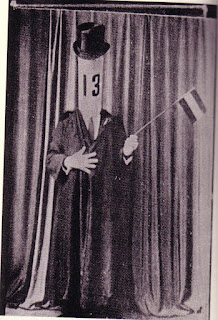 Hugo Ball in Cabaret Voltaire
But magic or not, Cabaret Voltaire was not selling enough beer and sausage to satisfy the philistine restaurant owner, and the Dadaists found themselves evicted out of their Niederdorf home.  On July 14th 1916, round about the time that British cavalry were attacking German forces at the Somme in one of the war’s most pointless exercises, the artists arrived in the stately Zunfthaus zur Waag, on the more respectable west bank of the River Limmat. It was the first of what would eventually become eight public “Dada Soirées”.  The event was well publicized beforehand and reviewed in a number of newspapers during the next few days, including the respectable Neue Zurcher Zeitung. The evening was the usual combination of Hennings’ poetry, Huelsenbeck’s  Chants Négres, acoustic experiments on the piano from Swiss musician Hans Heussers, expressive dancers from Rudolph Laban's newly opened school, Arp’s abstract collages, Ball’s sound poems, Taueber's puppets, Tzara’s simultaneous poetry – this time with four voices, and, to close, a grotesque comical dance with Janco’s cubist masks.  Each of the core members read out a manifesto.  Ball’s Dada manifesto included:
“Words emerge, shoulders of words, legs, arms, hands of words.  Au, oi, uh.  One shouldn’t let too many words out.  A line of poetry is a chance to get rid of the filth that clings to this accursed language as if put there by stockbroker’s hands, hands worn smooth by coins.  I want the word where it ends and begins.  Dada is the heart of words.  Each thing has its word, but the word has become a thing in itself. (…) The word, gentlemen, is a public concern of the first importance”.
Holding court in his favourite café in Zurich, Café Pfauen, an Irish writer by the name of James Joyce, who was working on a book called Ulysses, might have agreed with such deliberations.