This is part three of a three part essay on the birth of Dada.  Part two appeared yesterday, part one the day before yesterday. 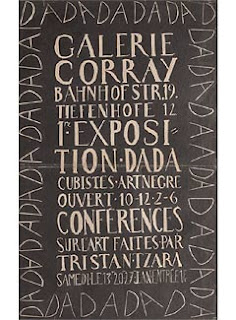 Ironically, homelessness on Zürich’s bourgeois west bank turned out to be a distinctly upwardly mobile move.  Within a few months the group had opened a “Galerie Dada” above the famous chocolate shop and café, Sprüngli, just off the fashionable Bahnhofstrasse and near the heart of Zürich’s banking world, the Paradeplatz.  Under the leadership of Tristan Tzara, who combined creative spontaneity with shrewd product identity management skills, (in today's business speak we would call him "innovative") programmes were published, press notices issued, invitations distributed and entrance ticket prices raised.  In the words of Hennings: “It had all become quite distinguished”.  The views and actions of the Dada artists were still notorious, but were becoming profitable too. Huelsenbeck commented that Galerie Dada was “a manicure salon of the fine arts, characterized by tea-drinking old ladies trying to revive their vanishing sexual powers with the help of ‘something mad’”. He returned to Germany in disgust.
By this time Ball and Hennings had already left the movement that they had inadvertently founded.  Just a few weeks after the famous get together in the Zunfthaus zur Waag Ball wrote in his diary:  “My manifesto on the first public dada evening (in the Waag Hall) was a thinly disguised break with my friends.  They felt it too. (,,..) When things are finished, I cannot spend any more time with them.  That is how I am”.  Ball had referred to Dada becoming a tendency, a movement, something he abhorred.  He had created Cabaret Voltaire as an oasis for subjective, even mystical explorations, but found himself part of a movement increasingly dominated by Tzara.  Ball’s focus on the Word had always been spiritual.  His admiration for Kandinsky was greatly due to the fact that he considered the Russian to be a priest rather than an artist. Ball’s only lecture at the Galerie Dada had been on Kandinsky’s search for the spiritual in art.  The editor of the English edition of Ball’s diary, John Elderfied, described Dadaism as it came to be known, as “aesthetic anarchism”, but Ball’s Dadaism as “aesthetic mysticism”.
Ball and Hennings settled in Ticino, in the southern, Italian-speaking part of Switzerland.  There they lived and continued to work, mixing with vegetarian artists and neo-pagans, cultivating a deep friendship with Herman Hesse and converting to Catholicism. Poverty continued to be their companion.  Hugo Ball wrote of medieval Christians: “They tried to obtain the gold of the soul not the gold of the purse.”  Likewise, on the eve of Dada’s international success, Ball had turned his back on “the gold of the purse”.  The Magic Bishop died and was buried, far from any artistic metropolis, in Ticino, in 1927.  He was 41 years old.  He is buried in the beautiful Saint Abbondio graveyard.  In 1948 Emmy Hennings joined him there.  In 1962 another friend was laid to rest in a nearby plot, Hermann Hesse.

The Swiss writer Friedrich Glauser, described Hugo Ball as “a person of such purity that only comes along once every hundred years”. 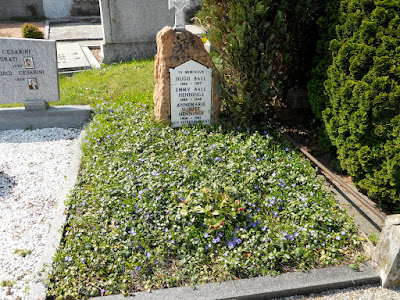 The Ball-Hemmings plot, Saint Abbondio Cemetery
Tristan Tzara happily took over the leadership of Zürich's Dada until the rowdy, eighth Soirée in Zunfthaus zur Kaufleuten in 1919, when the respectable audience, outraged by Dadaist provocations, stormed the stage.  Then Dada left Zürich.  Like avant-garde missionaries, Arp set up Dada in Cologne where Max Ernst, who would gain fame as a Surrealist,  was converted; Huelsenbeck brought the movement to Berlin and Georges Grosz became a devotee; Tzara, together with Francis Picabia (freshly returned from New York), led a very active Dada brigade in Paris that, with the help of Max Ernst and André Breton, eventually metamorphosed into Surrealism and, from there, into the mainstream.
Zürich is not the sort of place that wears its history on its sleeve.  The town that gave birth to Dada doesn’t exactly advertise the fact.  The Zunfthaus zur Waag still serves hearty Swiss fare to bankers and tourists but bears no memorial to the events of July 14th 1914; Café Terrasse is an upmarket restaurant where few diners stop to reflect that Lenin once played chess here while Tzara ‘invented’ the term; Zunfthaus zur Kaufleuten has been recommended by The Financial Times as one of the hottest party places in Europe (I'm not sure how reliable a guide The Financial Times is for parties), but the final Soirée has been long forgotten; though Joyce immortalised Café Pfauen (Café Peacock) in his last novel Finningans Wake, as “Peacockstown”, he too has been all but forgotten by Zürich and Cafe Pfauen underwent a renovation last year and in the process lost its name. The inventor of modern dance, Rudolph Laban, has been all but erased from the city's history.  As for Ball and Hennings, their many humble abodes in the Niederdorf still stand, but not one carries as much as a plaque.  But not all has been forgotten – with the financial help of Nicolas Hayek of Swatch watch manufacturers, Cabaret Voltaire was reopened in 2004 as a café and exhibition space.  It isn’t quite as wild as in the old days though. 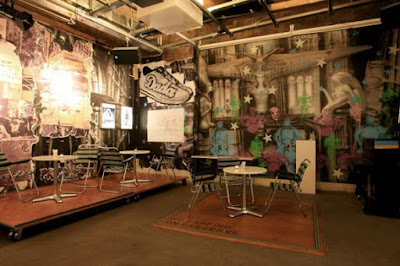 Where it all started: inside Cabaret Voltaire today
If the world is fortunate enough to reach the year 2016, then we can be sure that those who fell in Verdun and at the Sommes will be remembered in official commemorations, and rightfully so.  But so too the birth of Dada will be acknowledged, though perhaps on a smaller scale, with publications, exhibitions, the inevitable academic conferences.  And as they both recede further into the past, who can say which will be forgotten, and which remembered - the war involving millions across the globe, or the art movement created by a handful on the banks of the Limmat?
For Further Reading
Hans Arp, Dada: Art and Anti-Art, tr. H. Richter, (London, 1956); Hugo Ball, Flight Out of Time: A Dada Diary, tr. A. Raimes, (Berkely, 1996);  Brigitte Pichon and Karl Riha (eds), Dada Zurich: A Clown’s Game From Nothing, (New York, 1996); Erdmute Wenzel White, The Magic Bishop: Hugo Ball, Dada Poet, (Columbia, S.C., 1998).
Posted by P. M. Doolan at Tuesday, May 18, 2010