On Salomon Gessner: Artist and Poet 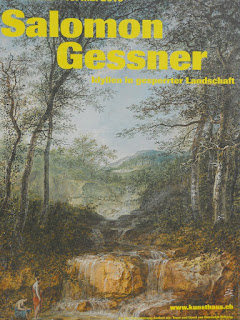 Zürich is not a boastful city and its residents do not trumpet the literary triumphs of their historical compatriots.  Take Salomon Gessner for instance: he became one of Europe’s most revered writers with his work translated into 21 languages during his own lifetime.  French Enlightenment star Denis Diderot was his French translator.  The King of England owned four, the Russian Empress, two of his paintings.  Mozart and Goethe visited him at his home in Zürich’s Old Town.  Nearly three decades after his death the Emperor of all Russians, Alexander I, fresh from defeating Napoleon Bonaparte, made a pilgrimage to Zürich in order to pay his respects to Gessner’s aging widow.  And yet, you are forgiven if you've never heard of Salomon Gessner. Such are the vagaries of artistic and literary fame. Salomon Gessner, once more famous than his fellow Swiss Jean-Jacques Rousseau, has almost faded from public memory.
He was born in 1730 into an old, bookish, patrician Zurich family.  Apart from a year studying the book trade in Berlin, he lived his entire life in a house in Zürich’s Münstergasse, that his father bought when Salomon was six years old.  Together with nineteen other young men from good families he founded the Tuesday Club, a weekly fraternity devoted to wine, friendship, love and poetry.  In 1756 his Idylls appeared followed by The Death of Abel two years later, and his name was made.  Idylls became such a best seller, with two competing translations in English, that it gave us the word “idyllic”. He became a partner in a leading publishing house and founded the Neue Zürcher Zeitung, today still one of the premier newspapers in the German-speaking world.  In the mid-1770s he founded a porcelain factory in the village of Kilchberg. In 1781 Gessner was appointed Silhherr or Lord of the Sihl Forest.  This position entailed the upkeep of the Silh Forest on the outskirts of Zurich, the source of the city’s firewood.  The job included a number of perks, not least a generous wine allowance and an idyllic house deep in the forest.  The house still stands and I must admit, I envy the tenants.
﻿﻿
﻿﻿For the remaining years of his life Gessner spent every summer in the house in the wood on the banks of the river Silh.  Not for him the awful, sublime terror of the Alps.  They were the stuff of nightmares – Alptraumen – not poetry.  Instead his lyrics transmogrified the woody hills near Zürich into a sort of contemporary Arcadia.  His paintings and prints, like his poems, depict waterfalls, trees, cliffs, old bridges, Grecian ruins, the Shepard with his flock, deer and, too often, slender and naked water nymphs. 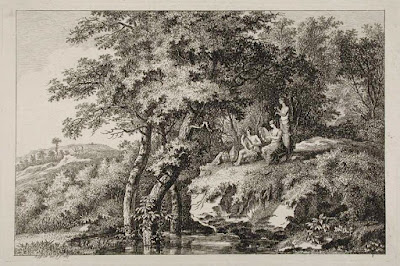 In today’s Zürich Gessner’s name is given to a heavily trafficked bridge, a busy street, a theatre and a parking lot. A statue stands in a park that has a reputation for being the site of drug deals.

But his poetry is seldom remembered, not to mention read. One can find his picturesque house at Münstergasse 9, near the bars and cafes of the city’s main nightlife drag, the Niederdorfstrasse and a stones throw from where Georg Buchner died. Here he played host to Goethe and Mozart and his widow was visited by Alexander I.

Just across the river, a large collection of his pottery is displayed in the Baroque Guildhouse  zur Meisen on the lovely Munsterhof and overlooking the River Limmat. From the city’s main railway station a 25-minute train ride on the S4 line takes one to the beautiful Sihlwald, deep in Gessner’s beloved Sihl Forest.   His house stands just 100 yards from the station.
﻿﻿﻿
﻿﻿﻿At an ecology centre near his house I once stumbled across a tiny exhibition of his work: a small collection of his porcelain; facsimiles of a few of his poems; copies of a handful of his paintings.  They shared the exhibition space with a  display on beavers and fish-otters.  But the Kunsthaus, as part of its centenary celebrations, is hosting a small Gessner exhibition which runs until May 16th.  Perhaps his time has come again. 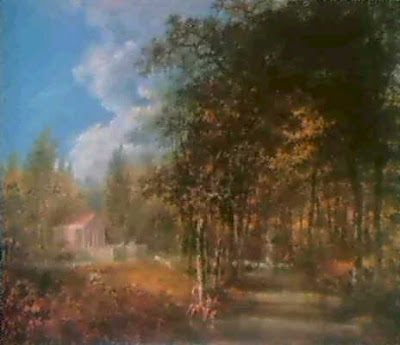