Here is a photo of a pretty street in Zürich.  It looks innocent enough.  It is a pedestrianised laneway in the "bohemian" Niederdorf area of the old town.  Nearly seven hundred years ago this street was called "Big Jewish Street". 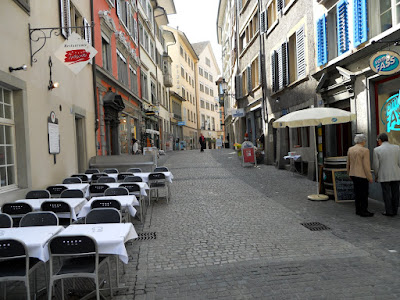 Just beyond the Spanish restaurant on the left is a large house that, during the Middle Ages, was the home to the wealthiest Jewish family in the town. 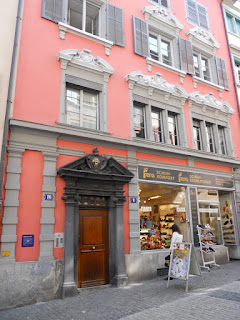 You can see that the facade comes from a later period, but the internal structure of the house is still the medieval original.  If you go through the front door (you'll need a key!) and ascend the stairs to the first floor you'll spot a painting, a fresco, on the wall.  This work of art is unusual.  Indeed it is almost unique.  The painting was commissioned by the Jewish family who owned and lived in the building in 1336.  What makes it so special is that figurative art was banned within orthodox Jewish communities.  As far as I know, there are only two works of Jewish figurative painting from medieval times in existence in Europe, and this is one of them.
The painting shows Jews dancing, although dancing was forbidden among orthodox Jews.  The painting has faded, but we can recognise the figures as Jews because they are wearing Jewish clothing, Jews being restricted in the types of garments they were allowed to wear.  Jews were also restricted as to where they could live and how they could earn money.  Banned from agriculture and most urban occupations, many Jews on this street were forced to become money lenders, including the family who lived in this house. We don't know why this wealthy family decided to break their own religious laws and commissioned an artist to create a figurative painting for them, but possibly they were only doing what the locals did.  In other words, like immigrants throughout history, they were simply trying to fit in.  If that is the case, it certainly didn't work.  In 1349 their neighbours murdered them.

Some Christians, who lived interspersed among the Jews, hated them for being money lenders.  Some differentiated themselves from their despised Jewish neighbours by having stone crosses erected above their doors, like this one: 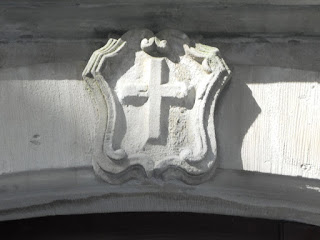 Now, if we turn to the left we can walk down the second street within the medieval Jewish ghetto, formerly known as  "Little Jewish Street": 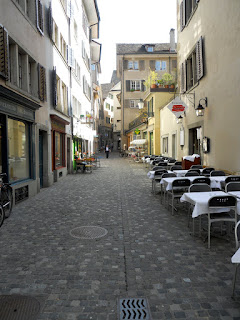 Towards the end of this pleasant laneway we find a door that leads to the newly named Synagogue Alley. 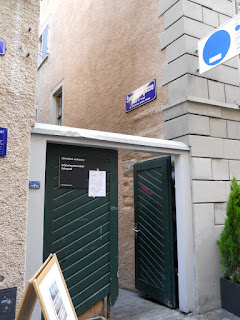 I think I can say with some confidence that most inhabitants of Zurich have never seen and never heard of this street. It hides a terrible episode in their history. Through this doorway we find a back entrance to a shop that sells books of classical music. The entrance is the site of what used to be the synagogue, the only one in town during the 14th century.  You can see where the entrance to the synagogue would have been in the following photo, just beyond the motorbike: 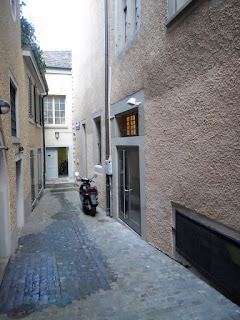 If we walk through the Synagogue Alley and we turn the only corner, on the right, we will see this narrow laneway: 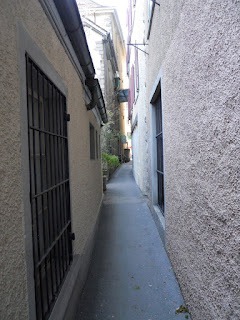 During the Middle Ages a narrow stream ran here, behind the synagogue.  In February 1349 the corpse of a small Christian boy was found in the stream. The body was brought to the Grossmünster cathedral.  Many southern Swiss cities had been struck by the Black Death in the preceeding months. One of the popular explanations for the disease was that Jews were poisoning the wells. In Zürich, the suspicions that Christians harboured towards the small Jewish community were about to spill over into terrible violence. It didn't take the mourning crowd in the church long to conclude that the little boy must have been murdered by the Jews.  Then it was suggested that they must have been attempting to poison the nearby well.

A raging, incensed crowd surged forth from the church and ran to the Jewish ghetto.  All the Jews they could find, no matter what the age, were pulled from their homes.  Those who were official residents of Zürich were burnt at the stake after being tortured, those who lived under the protection of the Holy Roman Emperor were tortured, and then deported.  Men, women and children met the same fate. Only a few managed to flee.

Almost overnight Zürich had been completely emptied of Jews.  And almost overnight the huge debts that some of the wealthy citizens had run up with the Jewish money lenders also conveniently disappeared. Jewish properties were left empty.  The city authorities, under the leadership of the mayor, Rudolf Brun, confiscated the properties and sold them at one eight of their value.  Brun himself bought many of the properties. When those few Jews who had managed to escape gradually trickled back to Zürich (there was no where else for them to go, the inhabitants of the nearby Swiss cities of Basel, Schaffhausen and Winterthur having now also decided to engage in anti-Jewish ethnic cleansing), Mayor Rudolf Brun, who now owned the property, rented the synagogue to them, the very same synagogue they had once owned.

A few months after the mass murder the Black Death visited Zurich. One third of the entirely Christain population died. Rudolf Brun survived and lived in this house, next door to the synagogue. 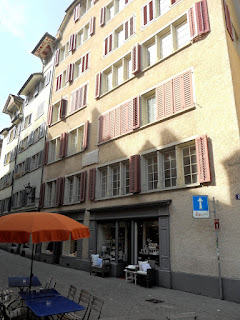 In 1360 he and his cook both died in this house, ironically, the victims of poisoning. He had many enemies.  Today Rudolf Brun is remembered in the city as a hero who founded the guild system, which brought great prosperity and stability to the town.  He is commemorated with a statue near the Fraumünster and a major bridge in the town centre bears his name.

In the 15th century Jews were banned from living in Zurich, and this ban remained in force until the mid-19th century.  Only in 1868 were Jews allowed to become Swiss citizens. Today the mass murder of 1349 is hardly remembered.
Posted by P. M. Doolan at Thursday, April 29, 2010