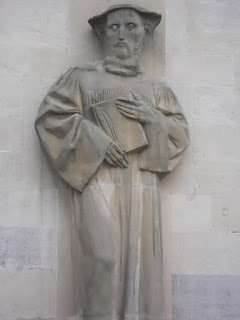 A man was born just over five hundred years ago who influenced life in Zurich as few others have done. This was a man whose influence in the 16th century stretched across the continent, reaching the Far East and the New World. He corresponded with religious leaders, princes, kings and queens as well as the greatest thinkers of the age, including that mighty networker, Erasmus of Rotterdam.  His still extant letters, penned during an age before email, when the delete button was unknown, number over 12,000; most of them are preserved in Zurich’s Central Library.  His house, the Antistitium, still stands outside the Grossmünster Cathedral at Zwingliplatz 4.  During his lifetime it became a type of communications centre for the European Reformation with all sorts religious radicals passing through, bringing news reports from across the continent. For 44 years he led the people of Zurich through some of the greatest changes that Europe had experienced since the fall of the Roman Empire.  His name was Heinrich Bullinger.
You will be forgiven if you have never heard of him.  If history is the art of collaborative memory, then Bullinger’s case is an outstanding example of historical amnesia. Although his statue stands outside the Grossmünster, if he is remembered at all, it is as ‘the other guy’, the one who lives, metaphorically speaking, in the shadow of Zurich’s Great Reformer, Ulrich Zwingli.
Born in Bremgarten, near Zurich, on July 16 1504, Bullinger was the fifth son of the local parish priest.  So much for the celibacy of the clergy!  At university he became disillusioned with the theological rigmaroles of his scholastic professors, and, like many young students, he caught wind of the new ideas that Martin Luther was beginning to propagate.  Luther made use of the Internet of the time, the printing press, and his ideas spread like a fire that would burn half a continent.
In 1522 Bullinger began teaching at the cloister school in Kappel am Albis and he threw himself into the study of Greek, so that he might read the New Testament, in the original.  He then commenced his study of Hebrew.  Like any modern renaissance scholar worthy of the name, he was digging into the past, pouring over ancient texts, grappling with the obscure meanings, in an attempt to plummet the authentic intentions of the original authors.  But textual criticism was a dangerous game. Then Bullinger met Ulrich Zwingli, and his life changed.
In just a few years during the early 1520s Zwingli crushed the power of the Catholic Church in Zurich.  When he persuaded the City Council to support his interpretation of Christianity, Zurich, in effect, became the world’s first protestant city (though that word did not yet exist).  An authority that had lasted a thousand years was swept away, almost overnight, as most churches were closed down, and all monasteries and convents were dissolved, their wealth handed over to the city. The city profited handsomely from the deal.  But some years later Zwingli was captured at the Battle of Kappel am Albis by a coalition of catholic forces. They tortured him horribly and then he was hung, quartered and burned.  His ashes were mixed with dung and scattered.
This should be the end of the story.  With catholic forces poised to wipe out the upstart church, the City Council surprisingly appointed young Bullinger as the new religious leader or ‘Antistes’.  It was a decision that saved the Swiss Reformation.  More moderate than his predecessor, Bullinger made peace with the catholic cantons.  He then set about putting his own house in order.  Schools were founded, the homeless were housed, and work was created for the unemployed.  From all quarters of Europe protestant refugees poured into Zurich and were warmly welcomed, including half a dozen churchmen from Oxford who were later instrumental in bringing about the Reformation in England under King Edward VI.  When Catholic Mary Tudor, “Bloody Mary” came to power and commenced executing English Protestants, many of those who fled were welcomed by Bullinger and given asylum in Zurich.  Queen Elizabeth later sent a silver cup to Bullinger as a mark of appreciation for Zurich’s hospitality. 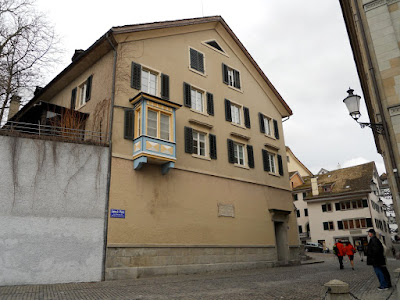 Bullinger's house, Zwingliplatz, Zürich
Bullinger’s theological works were distributed far and wide.  Dutch ships carried them to the Far East, and the first sermon ever preached in New York (then New Amsterdam) was a printed sermon of Bullinger’s.  His official residence, the Antistitium, opposite the Grossmunster at Zwingli-Platz 4, became a clearinghouse for news from all over Europe – a sort of early Reuters news agency.  Above all he remained the devoted pastor of the Grossmünster.
All (well, not quite all – visits from catholics were not frequent) were welcomed in his house, even though it must have been fairly full with the eleven children that he had fathered with a former nun. By all accounts he was a loving husband and father. He wrote love poetry and love songs for his wife that sound surprisingly sentimental and modern.
During the 1560s he lost his wife, three daughters and son-in-law to the dreaded plague.  He died at home after a long illness in 1575.  He was buried, in compliance with his own wishes, in an unmarked grave in the garden of the Grossmünster. As far away as England his death was greeted as a calamity. Heinrich Bullinger’s name then began to inexplicably fade quite away, almost disappearing from the pages of history. Perhaps the new electronic force, the blog, will help to keep his name alive. 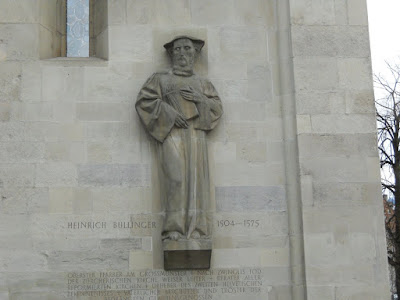