Murder in the Cathedral (almost)

We all know about September 11th - but what of September 12th, September 12th 1776, that is? One contemporary described the evil perpetrated on that day as being as monstrous as the Crucifixion itself. Within weeks, scores of newspapers, the blogs of their day, blanketed the German speaking world with detailed interpretations of the meaning of the heinous crime.  The debate split intellectuals into two camps – the supporters of the Enlightenment, or Aufklärung, with their optimistic view of human nature, versus the Christian critics of the secular Enlightenment, with their view that human beings were inherently evil.
So what happened on September 12th 1776?  Well, perhaps not very much, as it turns out, though an innocent man eventually paid with his life.  On the aforesaid morning the ruling council of Zurich attended the church service under the twin towers in the Grossmünster cathedral that sits atop a hill on the right bank of the River Limmat. 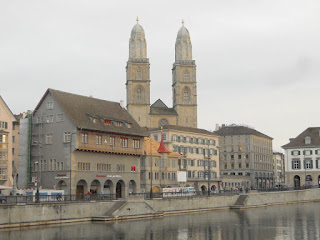 The twin towers of the Grossmünster
The wine that was served to the congregation looked murky and tasted repulsive.  After the service the wine was tested by a scientist who declared it had been poisoned with a “mixture of a gluelike substance and Spanish pepper dissolved in vinegar, jimson weed, Iris, fly poison and true arsenic.”  Arsenic!!  Somebody had tried to murder the pious leadership of this strict Protestant town (nevermind that no one had actually become ill, nor had anyone died).
The case quickly became a sensation and it seemed to question some of the most fundamental beliefs of the Enlightenment.  If humankind could be led by rational means along the path of progress, then how could such evil as had just occurred in Zurich be explained.  The leader of the Christian anti-Enlightenment assault was the Zurich pastor Johan Casper Lavater.  The case of the poisoned wine was for him an example of the underlying sickness in society; only faith in God could save humankind.  Lavater had been admired and visited by Goethe and his essays and sermons were renowned in the German speaking world. His chief foe was one of the leading propagandists of the Aufklärung, Friedrich Nicolai.  He claimed that Lavater was a misanthrope, that this single incident did not mean anything at all, and that perhaps the wine hadn’t even been poisoned at all.  By this time another team of scientists had questioned the original verdict regarding arsenic. 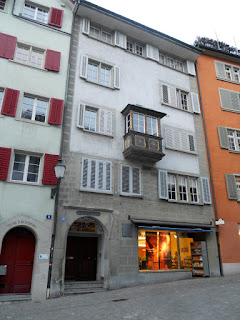 Lavater's townhouse, where Goethe visited
Meanwhile, as the intellectual ferment dominated newspapers and journals from Hamburg to Berne, in Zurich arrests and interrogations had led to nothing.  But in 1780 an unlucky clergyman and statistician by the name of Johan Heinrich Waser was arrested.  In 1774 he had been suspended after publishing an article accusing the Zurich city authorities of corruption. He had continued to publish articles critical of Lavater and the city authorities. One morning in March 1780 gendarmes arrived at Waser’s apartment and led him, still in his dressing gown and slippers, to the nearby town hall where he was locked in a cell. 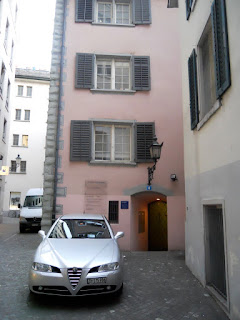 Waser's apartment, where he was arrested
Despite escaping temporarily out a window and plunging into the River Limmat, Waser was charged with being a traitor, and the authorities cynically tried to nail him for the attempted murder in the cathedral as well. 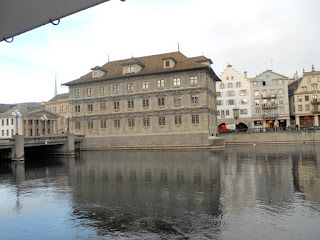 Townhall, where Waser escaped through the window
The eventual verdict did not mention the poisoned wine, but Waser was found guilty of treason and sentenced to be “delivered over to the executioner, who shall bind his hands in front and then lead him to the usual place of execution, where a sword shall be used to sever his head from his body”.  That very afternoon the unfortunate Waser was beheaded on a clearing that today forms a small park outside Globus department store, on Zurich’s exclusive Bahnhofstrasse. His last words, according to eye-witnesses, were, “Lord Jesus, I die for you.”

The story of the poisoned wine and the execution of an innocent man was gradually forgotten only to be recovered by the American historian Jeffrey Freedman.  You could google yourself to death and still uncover next to nothing about this case.  Freedman however immersed himself in archives in Neuchatel, Bremen, Berlin, Leipzig and, above all, the Zurich State Archives and Zurich Central Library and reclaimed this long lost memory.  You can read about it in his wonderfully written A Poisoned Chalice, Princeton University Press: Princeton and Oxford, 2002. 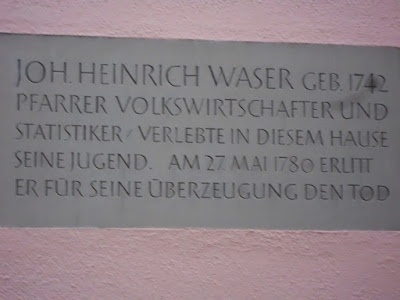