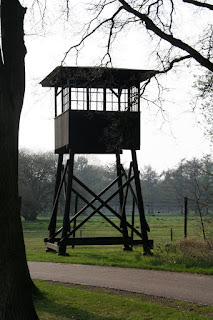 January 27th marks International Holocaust Memorial Day, a date chosen as it marks the anniversary of the Russian army liberating Auschwitz in 1945.  Last spring my family and I, together with some friends, visited the former concentration camp at Westerbork, a thirty minute drive from the city of Groningen in The Netherlands. Between 1942 and 1945 the German occupying authorities moved over 100,000 Dutch Jews, a few hundred Roma and Sinti and dozens of Dutch resistance fighters to this relatively isolated place. Among them were Anne Frank and her family. Some stayed for years, most for weeks or months. All but a few hundred were transported to the east, to places like Auschwitz and Sobibor, to be murdered. Westerbork was the gateway to death.


Dear All,
Finally it has come. We are on the list. We had hoped that despite everything we could see each other again soon, but alas this won’t happen for a while. We hope God will protect you. We must remain strong. A big kiss to everyone,
Moe


This heart-breaking postcard, written by a camp inmate upon finding her name on the list for transportation, hangs near the entrance to The Memorial Centre Camp Westerbork Museum. The museum exhibits a collection of photos, objects and audio interviews with survivors as well as unique film footage of the camp. The names of the 102,000 victims are continually projected on a screen. Some of the objects, like school reports from the children in the camp’s school can be touched and picked up. 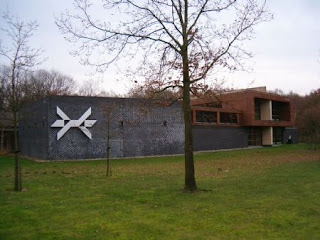 Most texts have English translations and further translations can be requested. The museum includes an excellent library of the holocaust and Dutch Jewish culture and the bookstore includes works in English. The site of the camp itself is a two and a half kilometer walk from the museum, along a path that winds through the wood. Motorized vehicles are banned because of the presence of a large radio telescope which today skirts the camp’s edge. A wire fence surrounds the perimeter of the camp. Signs on stones indicate where the barracks and various buildings used to be. One watchtower has been rebuilt. One can stroll along the Boulevard of Misery, the former main road that ran alongside the railway track, from where over 107,000 were loaded onto the trains to begin the journey to the east. The place where roll-call used to be taken now contains 102,000 small stones, each stone representing one Jew, Roma, Sinti or Dutch resistance fighter sent from this dreadful place to be murdered by the Nazis. In a far corner of the camp one can see the outline of the punishment barrack where Anne Frank and her family were incarcerated among resistance fighters and other “convicts”. They were considered to be criminals for disobeying the Nazis by hiding in their attic space in Amsterdam, and were held in a prison within a prison. Near the entrance to the camp stands the only original building still in existence. It was a private house until 2007. Once upon a time it was the residence of the Camp Commander, SS Obersturmfuhrer Albert Konrad Gemmeker.

Unlike the more infamous death camps in Eastern Europe, Westerbork was a “humane” camp. Prisoners were housed in terribly crowded barracks, and there was no escape from the continuous hustle and bustle, but no prisoners were beaten or worked to death here. Uniquely, in 1944 Gemmeker ordered the German Jewish photographer Rudolf Breslauer to film daily life in the camp. The documentary was never completed but Breslauer did shoot over 90 minutes of film. Some of the unedited footage can be viewed at the museum. It gives us an insight into life in the huge prison. The camp included a farm, a number of small factories, a school, a dental clinic and a post office. Just like in the outside world, people fell in and out love, were unfaithful, got married and gave birth in the camp. The camp hospital was the largest and one of the best in Holland, well staffed and well equipped, with patients receiving the best care possible. The fact that these same patients had all been earmarked for extermination led the historian of the Dutch holocaust, Jacques Presser, to describe the hospital as being both the most useful and most useless institution. Commander Gemmeker was regarded as a gentleman who never mistreated a prisoner and was known to love children. After one particular difficult birth he sent to Groningen hospital for an incubator for the newly born baby. He checked with the medical personnel regularly to ensure that the baby was being well provided for and seemed happy when the infant began to put on weight. Yet when the baby weighed six pounds it was put on a train to a “labour camp” and its death. 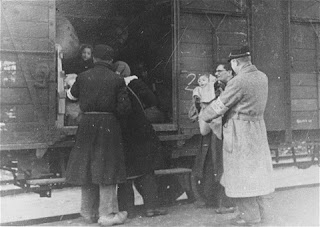 Opportunities for recreation existed and the camp boasted a shop, a hairdresser, a café and an orchestra with some of Holland’s finest musicians. Jewish German comedian and director Max Ehrlich founded a cabaret. With stage designs by Leo Kok, text and lyrics by Willy Rosen, music by Erich Ziegler and starring many of the crème de la crème of German and Dutch theatrical world, the cabaret became the best in the country, if not in the whole of Europe. Performances took place on a stage built from the ruins of a local synagogue. Camp inmates attended the performances, but the front rows were reserved for Gemmeker and the SS. Adolph Eichmann, engineer of the Final Solution, attended one performance and was struck by the beauty of the Dutch dancer Catherina Frank, one of the so called "Westerbork Dancing Girls". Her husband, Jacques, had just been deported to Sobibor following the birth of their only child. Eichmann, smitten by her beauty, arranged that she would be deported with her baby son to Theresienstadt to be held in relatively decent conditions. 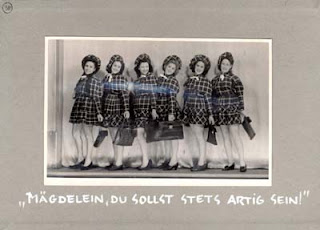 A genuine “Theatre of the Absurd”, or perhaps “Theatre of Despair”, Ehrlich and his troupe hoped that they could save their lives by keeping the SS laughing. Actress Camilla Spira described the futility: “volleys of laughter…..in the moment when they saw us the people forgot everything……the next morning they went to their death.” The mystic and diarist Etty Hillisum captured the desperation of the troupe’s plight: “Willy Rosen …. looks like a walking corpse. A little while ago he was on the list for transport, but he sang his lungs out for a few nights in a row … the commander, who valued art, found it wonderful and Willy Rosen was spared”. But not for long.

Once a week, on a Tuesday morning, a train with cattle cars filled with over 1,000 Jewish prisoners left Westerbork for the annihilation camps in the east. Some victims were in their eighties, others were just a few months old. Etty Hillisum wrote of how “babies suffering from pneumonia are shoved into a car, where they mew like lost lambs separated from their mothers.” When the last train departed in September 1944, the Nazis had achieved their aim: the once thriving community of Dutch Jewry had been annihilated.

Gemmeker allowed the internal workings of the camp to be organised by a staff made up of Jewish, mainly German, prisoners. These German inmates, led by the Dienstleiter Kurt Schlesinger, came to form an elite with the power of life or death over other prisoners. One division, the Ordnungdienst, led by the Austrian Jew Arthur Pisk, formed a Jewish Police and kept order in the camp, which gave them the nickname the Jewish SS. For the most part they were despised by the Dutch Jews. Every week, at Gemmeker’s command, they drew up a list for transportation for the following Tuesday. On Mondays the camp’s helpless population was gripped by dread and panic, the prisoners suspecting that those whose names appeared on the list for transportation the following day faced a worse situation than the one they were presently living in.

Eventually most of the Jewish camp police, as well as the theatrical stars and musical talents, would be sent to their deaths in Poland. Photographer Rudolf Breslauer was murdered in Auschwitz. Max Ehrlich was put on the final train to Auschwitz, where he was gassed. Another passenger on the same train was Anne Frank. She would die in Bergen-Belsen just weeks before its liberation. Shortly after he married a camp inmate, Leo Kok was deported with his wife to Theresienstadt. She survived the war but he was transferred to Auschwitz and perished. Willy Rosen was sent to Auschwitz via Theresiendstadt too. He died in the gas chamber together with his mother. Etty Hillisum and her parents and brother were killed in Auschwitz. Jacques Frank saw his new born son only once and was sent to Sobibor and gassed upon arrival. Catherina Frank and their son survived the war in Theresiendstadt. When the Canadians liberated the camp in April 1945, Kurt Schlesinger and Arthur Pisk were among the 876 survivors. Albert Konrad Gemmeker, the gentleman camp commander, was put on trial after the war in nearby Assen. For his part in over 100,000 murders he served six years in prison, then returned to his native Dusseldorf to live out the rest of his life. 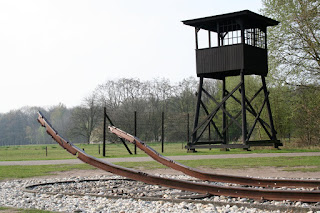 Camp Westerbork is only a couple of hours north of the tourist attractions of Amsterdam. The Anne Frank House in Amsterdam receives thousands of visitors every year, as does the Jewish History Museum. But when my family and I visited Westerbork last spring we encountered only about a dozen people in the museum; in the camp itself we were, surprisingly, entirely alone. Strolling along the restored pathways of the camp, stopping at the Boulevard of Misery, where thousands walked for the last time on Dutch soil, was a melancholic and ghostly experience.
Posted by P. M. Doolan at Tuesday, January 26, 2010