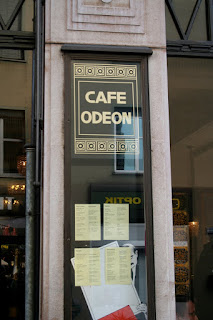 Although I love East Asian culture, during ten years of living in Japan I often missed the ambience of old style European cafes.  Now, having lived nearly a decade in Central Europe, I still relish the atmosphere in the historical cafes of Zürich's Old Town.  Few will argue against the view that Cafe Odeon is the premier cafe in the city's history.

Opened in 1911 as a Viennese, Jugendstil cafe, Albert Einstein was among the first guests.  He lectured at the nearby Federal Institute of Technology.  Instead of just taking his coffee breaks at the Odeon, seeing as he never had more than a handful of students, he ended up giving his lectures there too. Benito Mussolini, the future Fascist dictator of Italy, dropped in as well while visiting Zürich.  The Dutch dancer Mata Hari, who would eventually be executed by the Allies as a German spy during World War One, once danced in the upstairs dancing room.

Some of the Odeon's most famous nights occurred during World War One: in one corner sat the Russian exiles, mostly communists.  Lenin himself held court here, with comrades Kamanev and Trotsky and an assortment of other Bolsheviks and Mensheviks.  The Odeon was a frequent stop off point during James Joyce's nightly pub crawls, together with his English friend, the artist Frank Budgen.  Stefan Zweig, the Austrian novelist, and his compatriot, playwright Frank Wedekind, were regulars.  The noisiest guests were the Dada crowd: a gaggle of young Rumanians like the confident and witty Tristan Tzara and the quiet, friendly artist Marcel Janco,  as well as the German contingent like the argumentative German doctor and poet Richard Huelsenbeck and the other worldly poet Hugo Ball and his partner, the dancer and singer Emmy Hennings.  While the rest of Europe engaged in continent wide butchery, Cafe Odeon rocked to the sound of Rumanian song, Russia political tirades, German poetry and Dublin accented streams of consciousness. Those were the days, certainly. 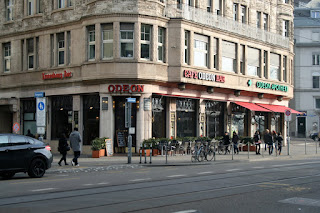 Cafe Odeon continued to attract artists, poets and musicians after the war.  Toscanini and Puccini were spotted here while visiting the nearby opera house and during the late 1920s Herman Hesse became a regular.  From 1928 until 1932 Hesse spent part of every year in Zürich while writing his novel Steppenwolf.  The Odeon became his favourite watering hole.  He even wrote an Ode to Cafe Odeon which was printed in a limited edition.  Thomas Mann was a frequent visitor to Zürich and after the Nazis came to power he settled in Zürich; Bertolt Brecht was also forced to flee from the Nazis and became a frequent visitor to Zürich, living here for a year after the war.  Both men could often be found in Cafe Odeon, Brecht keeping an eager eye out for beautiful young women and Mann keping an eye out for beautiful young men.  In 1957 a Swiss movie was made called Cafe Odeon, and during the 1960s and early 1970s the Swiss writers Friedrich Durenmatt and Max Frisch continued the tradition by which the Odeon has come to be renowned as a magnet for writers.
Alas, the cafe fell on hard times in the mid-seventies and acquired a bad reputation for heroin dealing, which led to it being closed down.  But it reopened in the early 1980s, much to the relief of just about everybody in Zürich.  True, it is much reduced in size and it is but a shadow of its former self.  When I opened the menu during my first visit to Cafe Odeon, nearly eight years ago now, the first thing I saw on offer was "American style burger and chips" and the music, REM, was far too loud for ten o clock in the morning.  But the original Jugendstil furnishings, with the long silver bar,  dark marble walls and glass chandeliers, have been restored. The coffee and food is good and, for Zürich standards, inexpensive. The cafe is always lively and attracts all sorts of people. 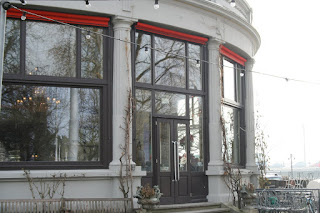 Just across the road is Cafe Terrasse. It's huge oval front opens onto a small garden with the river just beyond.  In the summer this is a beautiful spot, though the food is a bit pricey. Here one dines among the city's bourgeoisie - hedge fund managers, bankers and their foreign clients, come to Zürich to check that their secret bank accounts are safely tucked away beyond the reaches of the tax man. The Sunday brunch is popular among ex-pats. But Cafe Terrasse wasn't always a staid icon of Zürich's establishment.  Once upon a time ideas, wildly creative and hideously destructive, were tossed around like pancakes.  Lenin and his comrades met here daily for some serious games of chess.  Joyce dropped in during his nightly pub crawl.  And the mad Dadaists were to be found here too.  Indeed, according to legend, the name "Dada" was invented here. The French artist Hans Arp later wrote: "I hereby declare that Tzara invented the word Dada on 6 February 1916, at 6 p.m....it happened in the Cafe de la Terrasse in Zürich, and I was wearing a brioche in my left nostril." Now, those were the days.
Posted by P. M. Doolan at Sunday, January 24, 2010