The Sihwald in the Snow and in Gessner's Art

Here is a photo taken yesterday afternoon outside my home in a village south west of Zürich. 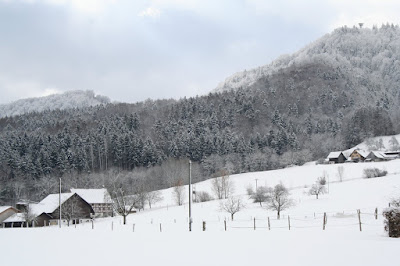 You can see the beginning of the Silhwald or Sihl Forest.  The trees rise up a steep incline that forms  a part of a ridge of hills, known as the Albis.  On the top of the hill you can spot a wooden tower, a relic from the Thirty Years War that devastated northern and central Europe in the 17th century and left a third of the German speaking population dead.  The Sihwald forms the oldest and largest mixed deciduous and evergreen forest in central Switzerland.  A place of tranquility and natural beauty, it also possesses cultural and artistic significance. 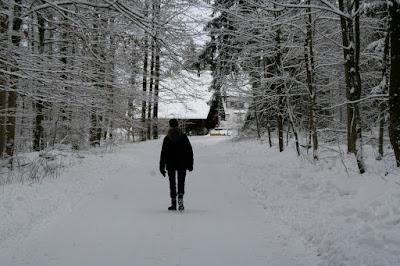 Here is a photo of my wife, Esther, just as she enters the forest.  In the distance you can see a house, the home of Daniella and Mischa and their children.  It reminds me of what the home of Hansel and Gretel must have looked like, and it is the last inhabited house in the forest proper.

For centuries the Sihlwald was the property of the Fraumunster nunnery.  The nuns became incredibly rich and earned an income from selling the wood of the forest as fire-wood to the inhabitants of Zürich.  During the Reformation the forest became the property of the city.  One of the most important positions became that of the Sihlherr, or Master of the Forest.  His job was to ensure an endless supply of wood for building and for fires.  In the 19th century the Silhwald became a locally protected reserve and in 2009 it became a National Park.  Today it is preserved by a policy of minimal maintainance.  No branch is cut unless it forms a danger to human life or unless is carries a contagious disease.  If a tree falls, it is left to rot where it fell.

In the 18th century Salomon Gessner acquired the position of Master of the Forest.  The job came with a summer-house deep in the forest.  Besides being the most translated poet of the 18th century, Gessner was a journalist of continent wide fame, a leading ceramicist and a famous painter.  At some future point I will post an article about his many talents.  For now let us briefly consider his artistic work. Gessner was instrumental in the development of the sentimental landscape painting.  He used the Sihlwald, with its caves and steep hills, its river and many small waterfalls,  as his inspiration, but he idealized the forest and populated it with Arcadian temples and Grecian nudes. Though influenced by the ideals of the Enlightenment, one can see the beginnings of romanticism in Gessner’s landscapes of the Sihlwald, with his worship of the woods and his stress on the interiority of the subjective experience of nature.

Today Gessner is little more than a footnote in the History of Art, but his influence on later artists of Northern Romanticism, like Arnold Brocklin, was huge.  Next month Zürich’s Kunsthaus will host a large Gessner exhibition, which is sure to reclaim his reputation somewhat. 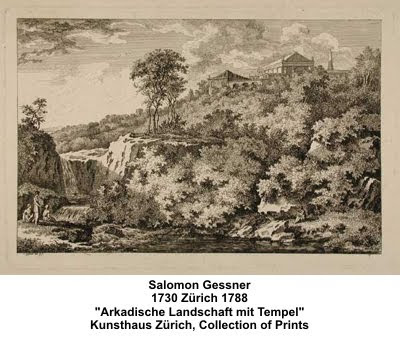 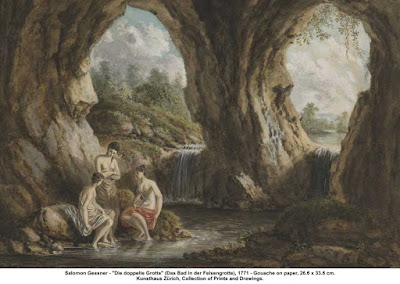 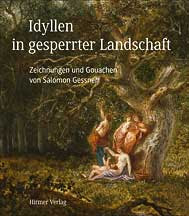 The exhibition will be accompanied by a full catalogue, to be published in February.

Read more essays on Switzerland in my ebook.
Posted by P. M. Doolan at Sunday, January 31, 2010