Some years ago I spent a couple of weeks in Syria. People are friendly towards foreigners there, and mostly they assumed I was British or American. When they discovered I was Irish, they invariably embraced me as a comrade in arms. At the time, the IRA was at the height of using armed struggle, or “physical force” as they called it, to oust British rule in northern Ireland. Syrians, well fed on government propaganda, happily considered me to be a fellow anti-imperialist. When they discovered that my female companion was Dutch, they leapt for joy. The Dutch soccer team, PSV Eindhoven, had just won the European Champions Cup. A Dutch-Irish couple seemed too good to be true. Wherever we went we were feted like celebrities.
Today demonstrations continue to erupt across the dictator infested Arab world. While most of our attention is taken with what seems to be a bloody stalemate, or worse, in Libya, hundreds of protestors have been killed in Syria. President Assad’s regime is at least as repressive as that of Gaddafi’s Libya. 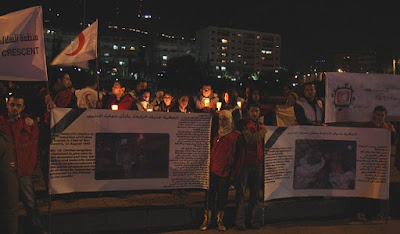 Now Assad suggests that he will implement reform, like ending 48 years of emergency rule. Repeat: 48 years of emergency rule! Can this guy be for real? Think about it like this: Syria was put under emergency rule when the Beatles were teenagers playing in a bar in Hamburg! This sounds like a sick joke. People have taken to the street, and the autocrat now promises reform, but thinks he can keep his job. As Jordanian commentator Hasan Abu Nimah has put it, this is "too little too late". Even as Assad announced the end to emergency rule this week, fresh reports were published of the killing of demonstrators in the city of Homs. Meanwhile, the opposition in the street has formulated nine demands:
1. A democratic constitution
2. Ending of the state of emergency
3. Release of all political prisoners
4. A new political parties law
5. A new elections law
6. Formation of a Truth and Reconciliation Committee
7. Full political rights for Kurds
8. Reform of media laws
9. Restructuring of the security and intelligence apparatus
It is exceeding unlikely that Reformer Assad will accede to many of these demands. And we know that this regime is capable of great violence. In 1982, when his father faced an Islamist revolt in the city of Hama, he pounded the city with artillery and then finished it off in lethal style: full death toll – 20,000 dead Syrians. Objectively, that means in one week in 1982 the Assad family business killed many more Arabs than the great evil Israel has done in over six decades of conflict.
So, should the West be sending our forces hurtling into Syria like in Libya, or even like neighbor Iraq. Not quite. Syria is a complex country. Assad belongs to the Alawite Islamic minority, which comprises 11% of the population, 74% are Sunni Muslim, 10% are Christian and 5% are Druze. Ethnically the population is a mix of Arab, Armenian and Kurds. A further complication is that Syria is an ally of Iran – a cynical partnership if there ever was one, as the two governments in effect despise what the other espouses, one being a Shia theocracy and the other a secular socialist republic.
What they share is an anti-imperialist attitude towards the West and the use of the Israel-Palestine issue as the whipping boy that drums up feverish support. The latter gives each an opportunity to involve themselves with Hezbollah, and thereby play a key role in Lebanon’s so called domestic politics.
I wish there were some way I could pay my Syrian friends back for their kindness during my visit all those years ago. Like all the people of the Middle East – Iranian, Iraqi, Libyan, Tunisian, Egyptian, Bahraini, Yemeni, Saudi, Afghani and Palestinian – they deserve the right to have responsible governance and democratic freedoms.
But we cannot simply wish away tyrants like Assad. There are Republicans in the USA who have criticized President Obama’s intervention in Libya, yet who call for intervention in Syria as an opportunity to hurt Iran. These hawks disregard the lessons of Iraq and Afghanistan, where military intervention has worsened the lot of the civilian population.
They should bear in mind the warning of former CIA operative Robert Baer in The Financial Times that: “the potential for violence in Syria makes Libya and Yemen look mild. Moreover, chances are good that chaos in Syria risks spilling into neighbouring countries – notably Lebanon, Jordan and Iraq, and maybe even the Arab side of the Gulf, which is already riven by sectarian divisions. This is a worst case scenario, but the point is if it comes about, there will be no way the west could just stand by and hope for the best.”