On Finding a Book 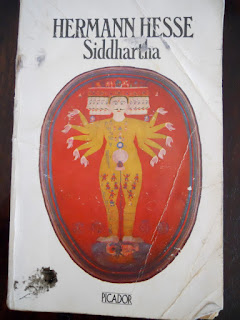 There are books, read in youth, the content of which we still remember decades later. And there are books, of which the act of reading itself can be vividly recalled as if it were yesterday.


It was July 1980. I had been travelling for three years. In the multitudinous din that was India I was alone. Emaciated, jaded and worryingly low on funds, I arrived in the holy city of Madurai. Near the grand temple I found a room in a cheap hotel, a loveless place called Venus: a small window, a bowl and jug of water on the floor and a narrow bed. Hidden under the bed I found, like a discarded miracle, a copy of Hermann Hesse’s Siddhartha. Sitting cross legged on the bed I opened the book and my eyes read the most beautiful sentence ever written: “In the shade of the house, in the sunshine on the river bank by the boats, in the shade of the sallow wood and the fig tree, Siddhartha, the handsome Brahmin’s son, grew up with his friend Govinda.” Reading that sentence, so unexpected, was the purest aesthetic experience I had ever had. I recognized that then, and I can recall it still – aesthetic joy. The sounds of the surging Indian city outside were stilled as I read on in a pool of silence and finished the novel. Then I started again. When I left the hotel, three days later, I left the book where I had found it. Perhaps someone else right now is savouring their first encounter.

Some months later I was living in an attic room in a tall red-bricked building in a Dutch university town, lashed by the salty rain that rolled in off the cold North Sea. I had by then bought my own copy of Siddhartha and I read Hesse’s other works as if the ancient oracle of Delphi was whispering obscure wisdoms into my restless mind, Narcissus and Goldmund, Steppenwolf, The Glass Bead Game.

Of course everyone of my generation read Hesse during their youth. We grow up, and we put childish things to one side. I have grown to become less adventurous and much less filled with the aching of idealistic hope. Aesthetic enjoyment is less likely to pounce unexpectedly, more likely to be revealed in the shade of the house rather than in the sunshine on the river bank. Wagner has replaced Hesse. Still, when I moved to Zurich and discovered that Siddhartha had first appeared in installments in the local newspaper, the Neue Zurcher Zeitung in 1922, strange as it might seem, it helped me to feel at home in the city. Hesse loved this city too, I discovered. During his writing of Steppenwolf he spent a part of every year here. And so, now middle aged, I find myself hunting for his opinions of the city and searching out his old haunts, about which I will write on another occasion.

And the moral of this story? Never regret leaving a book behind.
Posted by P. M. Doolan at Wednesday, April 14, 2010