The Evil of Smithfield Foods

Although there is an oversupply of competition, from arms manufacturers to banks, the prize for the corporate entity that perpetrates the greatest amount of evil must surely go to Smithfield Foods Inc.

In the politics of food, the individuals who run Smithfield are like gigantic bullies, destroying livelihoods and multiplying misery. Thanks to their wagonload of lawyers and bought politicians they destroy ecosystems almost with impunity. For the moment, let’s forget about the farmers whose livelihoods Smithfield destroy, the suffering animals Smithfield torture on a massive scale and the poor workers whose labour Smithfield exploits in the vilest manner.  Instead let’s just focus on what Smithfield is doing to our environment and health, after all, on their own website they describe themselves as being “stewards of the environment” and committed to “environmental leadership”. In 1967 there were one million hog farms in the USA; today there are just one hundred thousand. In testimony before the House Judiciary Committee in 2000 the president of the American National Farmers Union admitted that just four companies now produce 60% of the country’s pigs. By far the biggest is Smithfield. The factory farm methods that dominate American food production means, as novelist Jonathan Safran Foer writes in his Eating Animals (Hamish Hamilton, 2009): “farmed animals in the United States produce 130 times as much waste as the human population – roughly 87,000 pounds of shit per second.”  Most startling is that “there is almost no waste-treatment infrastructure for farmed animals… no sewage pipes, no one hauling it away for treatment, and almost no federal guidelines”.  And Smithfield and their like want to keep it that way.  Safran Foer informs us that Smithfield “produces at least as much fecal waste as the entire human population of the states of California and Texas combined”. Whatsmore, “the waste nurses more than 100 microbial pathogens that can make humans sick”.  That is hard to believe, isn’t it?  But it gets worse as he tells us that the waste includes “stillborn piglets, afterbirths, dead piglets, vomit, blood, urine, antibiotic syringes. hair, pus, even body parts”.  All of this, well, what used to be called in more innocent times “slurry” is dumped in gigantic cesspools, but when these are in danger of overflowing, Smithfield has an easy solution – they simply spray the liquefied manure onto fields, and when that doesn’t do the job “they simply spray it straight up into the air, a geyser of shit wafting fine fecal mists that create swirling gases capable of causing severe neurological damage.”  That’s called externalizing costs – it keeps Smithfield’s costs down, it keeps the cost of your pork down and instead everybody gets to pay.
Of course sometimes Smithfield goes too far and even the politicians who live in Smithfield’s pocket can’t protect them. Like in 1997 when Smithfield was found guilty of a few thousand violations of the Clean Water Act.  The company had knowingly dumped pollutants, including deadly faecal coli forms.  Safran Foer doesn’t tell us this, but according to The Guardian (May 2nd,  2009)most troublingly, they were also found guilty of falsifying documents (i.e. lying) and destroying records.  To pay for their sins they were fined a grand total of 12.6 million dollars, the amount of money it takes them ten hours to earn, every ten hours.
Of course we in Europe, with our much tighter pollution laws, can count ourselves lucky, right?  Since 1999 Smithfield has opened operations in Europe and moved into Poland, Romania, Spain, France, the UK (Norwich Food), as well as Mexico, Brazil and China. The upheaval they have caused in Eastern Europe has been particularly disturbing, described by The New York Times (May 5th, 2009) as one of “the Continent’s biggest agricultural transformations”.  Backed by its vast resources, including EU subsidies, and powerful local political allies, Smithfield is spearheading an agricultural revolution that ignores the protests of local small farmers and residents.  Big money talks and in 2001 Smithfield was able to thumb its nose at EU environmental regulations when Poland and Rumania reclassified pig manure as a “product” rather than a waste.  Now Smithfield’s dumping of “slurry” threatens the ecosystem of Northern Poland and the Baltic Sea.  You can watch a video on Youtube that shows one of its spillages in Poland, which includes not just tons of fecal waste, but also still born piglets, afterbirth, dead piglets and syringes.  So much for EU regulations. Robert Kennedy Jr. spoke to the Polish Senate on how “Smithfield’s invasion of North Carolina” has killed over 100 million fish in that state’s rivers.  But his speech fell on deaf ears. 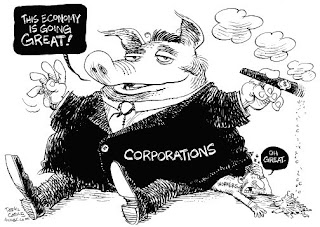 Meanwhile, the recent swine flu epidemic broke out just five miles from Smithfield’s new hog farm in Mexico, the world’s biggest.  A large number of cases were recorded closer to Smithfield’s original home, in North Carolina. And swine fever swept through three of Smithfield’s Romanian hog compounds, two of which, surprise, surprise, they had opened without having a permit.
If only this were an April Fool's joke - but the joke is on us and Smithfield must be laughing. Jonathan Safran Foer summed it up: “one couldn’t imagine a more seemingly depraved company than Smithfield”.
Posted by P. M. Doolan at Thursday, April 01, 2010