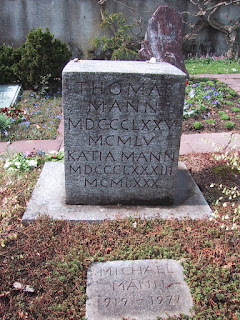 For devotees of Thomas Mann, Zürich, Switzerland, is somewhat a place of pilgrimage, for it is here that the Great Mann saw out his last years and came to his final rest.
The author of Death in Venice and The Magic Mountain fled from his native Germany shortly after the Nazi accession to power in 1933.  Mann and his wife headed for Zurich, the city where they had honeymooned in lavish style in the Hotel Baur au Lac in 1905. Mann wrote that he would never forget his five years living among the hills and woods of this beautiful city, but in 1938 they crossed the Atlantic to the United States. Soon after World War Two, fleeing the increasing intolerance of McCarthyism, once again the Mann family returned to the Old World and in 1952 they settled again in Switzerland.  In 1954 they moved for the last time, to a house overlooking Lake Zurich in Kilchberg.  A little over a year later Germany’s greatest man of letters was buried in the village cemetery.
Mann’s last study has been moved from Kilchberg and is today nestled in the beautiful Bodmer House, next to Zurich University at Schonberggasse 15.  It is opened to visitors on Tuesday and Saturday afternoons free of charge.  The house has a long literary tradition going back centuries – Goethe visited it on two occasions. On the second floor, Mann’s study appears like it was always there, an organic space grown within an ancient house.
To visit the preserved room of a long departed always has something ghostly.  What was once a room of creativity and life has become a shrine.  Stepping into Mann’s study is like entering the burial chamber of an ancient Saxon king.  The great man’s possessions are all here.  His Nobel Prize for Literature hangs in the entrance hall, near his death mask.  His books line the walls: Luther, Schiller, Ibsen, Joyce.  The massive mahogany writing desk, where he wrote all of his books, supports a calendar that says August 12th, the day of his death. On the desk stand what Susan Sontag once referred to as “a nest of small photographs in silver frames”, as well as his collection of Chinese boxes, a head of Buddha and a number of ancient Egyptian figurines.  Indeed there is something Egyptian about the room, the objects have been mummified.  Only the body is missing.  From the window, looking across the medieval town centre, in the far distance, perches Kilchberg church and cemetery, where Mann lies buried.
In June 1955 Thomas Mann turned 80 and the village of Kilchberg swarmed with well wishers.  Nearly a thousand cards, telegrammes and gifts arrived.  He was most touched by a gift from his children, a gold ring with a tramoline stone. Albert Camus sent his best wishes, as did Pablo Picasso.  The presidents of both Germanies, East and West, sent official delegations. The President of the Swiss Republic came to offer his congratulations and the rector of the prestigious Federal Institute of Technology arrived bearing an honorary doctorate for the octogenarian. A party was held in the village hall and the following night he was regaled by the Zurich City Council at a lavish reception in the City Theatre, the Schauspielhaus, followed by drinks at the Hotel Baur au Lac, where the Manns had spent their honeymoon a half century ago.
Mann seemed tired and easily flustered during these days, but otherwise in excellent health.  Two months later he died, after a brief illness.  Once again the quiet village of Kilchberg hosted visitors and dignitaries.  The small church filled to bursting.  The West German delegation took up a prominent place inside the church but the East Germans were prevented from bringing in their huge funeral wreaths, capped with the atheist hammer and sickle.  Voices were raised in anger.  Outside in the cemetery journalists hung around in untidy groups while onlookers roamed among the graves.
The 161bus from Zurich’s Burkliplatz stops at Kilchberg’s medieval village church, the end of the line.  The Mann family plot is towards the back of the cemetery.  Here the great man rests with his wife and three daughters.  The gold ring that they gave him lies buried here too. In a late afternoon in November I stand here as the moon takes its appointed course across the crystalline splendours of the valley with the mercurial, leaden waters of Lake Zurich below. And there, in the far distance, the towering marble statuary of the high Alps in full snow embraces the horizon.  The view is magical; I call it Mann’s Magic Mountain.
Posted by P. M. Doolan at Sunday, December 20, 2009