This summer Europeans by the hundreds of thousands headed over the Alps (or should I say "under the Alps", creeping through the continent's longest traffic jam, the Gotthard Tunnel) and down to Italy. Well, nothing strange about that - pale but affluent North Europeans have been doing that on a regular basis since British aristocrats invented tourism in the 18th century by embarking on The Grand Tour. But this year was different. Many were heading to a smallish lake in the north of Italy to experience a temporary work of art. Yes, they weren't going to Italy simply to lie on the beach, or go shopping, or immerse themselves in the Renaissance. They were going in order to walk on water. 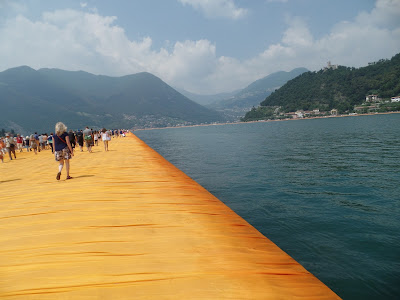 Christo's last work of art was The Gates, in Central Park, New York in 2005. Considering that he isn't getting any younger, (well, none of us are really) and he is now 81 years old, any new installation of Christo's might be his last, making it all the more imperative that if you want to see a work of this iconic artist of the globalized art world, then you had better get down to northern Italy this summer. And I must say, I didn't think twice.

Most artists work on paper or canvas or delve their hands in clay or apply their chisel to stone. For Christo, however, the sub-Alpine landscape of the north Italian lakes, specifically lake Iseo, was his canvas, so to speak. Imagine having a map of Lake Iseo and then, with a strong yellow pencil you draw a firm line across the map, back and forth. That's what Christo did. Except it wasn't a map of the Lake but Lake Iseo itself upon which he inscribed his shimmering yellow line; a line that stretched for four and a half kilometers across the lake to a mountainous island, that skirted the island and then darted across the lake again, to completely encircle a smaller island and then, via another route, return to the mountain and finally back to the mainland. His line consisted of 220, 000 plastic cubes lashed together, secured to the lake floor, and then covered with 100,000 square meters of dahlia-yellow nylon polymide fabric. The costs, 15 million dollars, were, as always, entirely paid for by the artist himself, without any subsidies. In late June The Floating Piers was unveiled and as with all of his works, the public were invited to experience it free of charge. Local authorities were expecting 600,000 extra visitors. Instead, 1.2 million came over a period of 16 days.

Unlike a drawing of a yellow penciled line across a landscape, in this work the viewer becomes a participant, a performer. You step onto and into the work and by walking across the piers, by sitting and sunbathing (swimming was forbidden), by picnicking or by collapsing from dehydration and being whisked away by the medical emergency service (something we witnessed three times on the scorching hot day that we visited), you become a performer in a massive, communal artistic event. Yet, despite the thousands of people who are involved in the construction of such an installation - the divers, the seamstresses, the lawyers, the cartographers, truck drivers, boat drivers, helicopter drivers, photographers, construction workers, engineers, local politicians, notaries, computer scientists, police authorities, volunteers, medical personnel, plastic factory workers, to name just a few - despite all of them, this is the work of one man. And, although all those who weren't collapsing from heat exhaustion or dehydration were having the time of their lives, as far as I could see, he didn't do it for us. No, this was the work of one selfish man who had a vision and whose motivation was, he wanted to see what it looks like. The work was totally useless, with no reason whatsoever to exist, except that Christo was curious to see what the colour yellow would look like, at dawn, at sunset, under the blazing sun, drenched by torrential cloud bursts, empty of all life, supporting tens of thousands of joyful people engaged in the utterly useless activity of going for a stroll across the water. Somehow, I suspect that hidden in here is a lesson for us all on how to live our lives.