During a recent trip to Luxembourg City I stumbled across the work of Paris based American artist H. Craig Hanna. And what a happy day that was.

The exhibition is Hanna's first ever museum show (let there be many more!) and the centerpiece, "Arrangement of Dancers", recently purchased by the museum, is his first work to be sold to a museum. I hope many others will add his work to their collections, though that might be demanding too much courage from contemporary museum directors.

Although experimenting with new media, like painting  with ink on perspex, Hanna clearly stands in the European tradition of art. He has studied the greats, learned technique through imitation, before experimenting and creating his own style. Obviously Hanna has been inspired by the great works of the western history of art - works from people like Titian and Velazquez, but also more modern painters like Sargent and Whistler. His works reveal a meticulous attention to composition and colour. Subjects are overwhelmingly portraits, nudes and occasionally landscapes. What they all have in common is that they strive to achieve beauty. 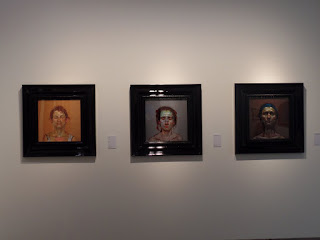 All of which means that Hanna is certainly painting against the grain. Indeed he is way out of step with the times; he's even got talent. And talent, as a former pupil of mine, now a student in one of Europe's leading art schools, was told by her tutor, artistic talent is not only valueless, worse, it is a distinct disadvantage. Let's face it, the works of Ai Wei-Wei and Tracey Emin don't demand a lot of craft, but this is what museum directors want to see in their collections. At the big art fairs that control the supply and distribution of artworks, like Art Basel and Frieze, artistic skill counts for naught, less than naught. Needless to say, Hanna has never been allowed to exhibit his works at any of these mega-exhibitions.

My daughter went down to the Venice Biennale a few months ago, equipped with her sketchbook and journal. Together with her teacher and fellow pupils from her International Baccalaureate Higher Level Art class, they wanted to study, write about and perhaps sketch works from the world's leading artists today. She loved Venice of course, but came back with her sketchbook empty and a fairly depressing opinion regarding contemporary art. I'm not surprised. Luckily she also attended Hanna's exhibition. Though critical of some of his pieces ("a bit too like Japanese animation"), all in all, she was inspired.

It's not that I'm against any artist who exhibits at one of the globally marketed shows. I love the work of Berlinde de Bruyckere and the work of Anselm Kiefer, to name just two. But there is an awful lot of bullshit out there. And a lot of bullshitters too. And there is a lot that lies in-between. Artists who have some interesting things to say, but who receive an amount of attention that is exaggerated, especially when one considers figurative artists like H. Craig Hanna, who receive too little attention.

Take one of the stars of the Venice Biennale 2015 for instance, Samson Kambalu. His contribution to this prestigious exhibition was 400 footballs that are plastered with texts from the Bible. They look like this: 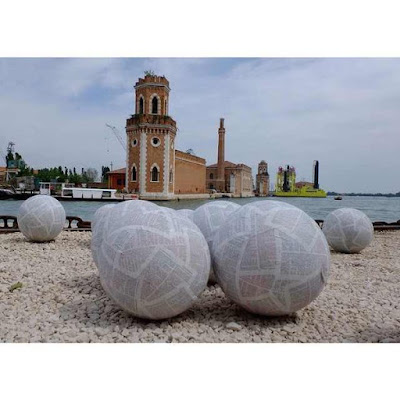 Now, obviously Mr. Kambalu didn't write the Bible, nor did he make the plastic balls. He may not have even gone to the trouble to print the texts or do the sticky work of gluing them to the balls. Maybe he has 'assistants' to do that. Hey, in fact you can make one yourself  - just watch his DIY video.

In other words, Samson Kambalu simply came up with an idea, (or maybe somebody else did). In fact he came up with the idea over 15 years ago, and he has been flogging it ever since at leading exhibitions all around the world, in between giving TED Talks and guest lectures at places like Oxford University's Ruskin School of Art (one wonders what Ruskin would think).

The question is: is it a good idea that he had? Is it a shitty idea? Is it a good work of art or is it a piece of crap? Well, there isn't really any criteria to judge, is there? We can certainly agree that it involves no skill, no craft and nothing that looks like what used to be termed "artistic talent". All we can say is, it is the type of thing that lots of Kambalu's fellow graduates at Chelsea College of Design aspire to. And the artworld loves it. In the little promotional video clip of the Venice Biennale, Mr. Kumbalu mentions that he was inspired by Michelangelo's Last Judgement. I'm not making it up, he says it himself. On yeah, I'm sure he was inspired by Michelangelo, but I wonder for how long did Kambalu sit before Michelangelo's work, how long did he study it before it provided him with inspiration? Somehow, I suspect that Hanna and not Kumbalu has been more deeply inspired by Michelangelo.

So, I guess, in this centenary of the birth of Dadaism, what it boils down to is answering the question - What is art?  I favour the burning warehouse theory. Imagine a warehouse is burning down. You are ordered to run inside the burning warehouse and save the artwork or artworks inside. You have no idea what is inside, but you know you must run in as quick as possible and run out immediately with the art. You run in and you spot, in one corner, a work that you've never seen before, let's say Hanna's "Arrangement of Dancers". In the other corner you see a work that you've never seen before, let's say one of Kambalu's "Holy Balls". Now be quick, the fire is burning: with which one will you run out of the warehouse?

The exhibition "H. Craig Hanna: Paintings and Drawings" runs until late May.