I spent five days earlier this month in Poland's beautiful medieval city of Cracow (Krakow), with 12 young students. Although we enjoyed the beauty of the city and partook of its many culinary delights, the main purpose of our journey was to bear witness to the greatest crime of modern European history, the Nazi murder of 6 million Jews.

We began our exploration with a visit to Krakow's ancient Jewish ghetto, Kazimierz. For six centuries is was a hub of Jewish culture and most of Krakow's 64,000 Jews still lived here when the German army arrived in 1939. Today Jewish residents number less than twenty. It is a vibrant, hip part of the contemporary city, with all sorts of Jewish themed tours and Jewish cafes and restaurants, but these are run by gentiles. 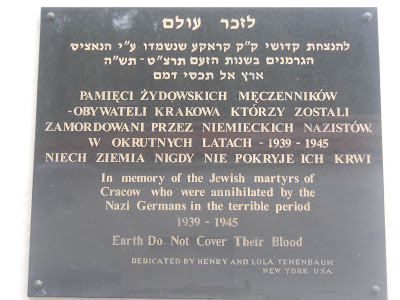 We visited the old cemetery, once desecrated by the Nazis, but now restored.

Likewise, we visited the synagogues, recently restored. Only one gives regular services for the local, tiny Jewish community. 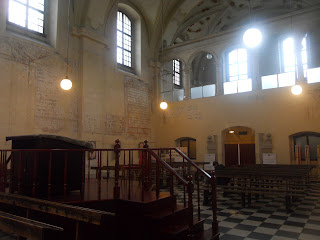 We then crossed the River Vistula, to the suburb of Podgorze. In 1941 the German authorities forced all Jews out of the city proper and 15,000 of them were crammed into this new, much smaller ghetto. Those fit for work were selected on a large square. The atrocities committed in Podgorze are marked today by huge, empty chairs that dot the square.  They remind us of the Jewish families forced to move to this place, bearing only the belongings they could carry.  Sometimes children carried the family's chairs.

From here we walked to the former enamel factory of Oscar Schindler, made famous by Thomas Keneally's historical novel Schindler's Ark and the Steven Spielberg film Schindler's List.

The former factory has recently been opened to the public and Schindler's office restored:

The rest of the building now hosts an excellent permanent exhibition on life in Krakow during the German occupation.  As our museum guide informed us, the Germans deliberately refrained from destroying Krakow because of its perceived rich German cultural heritage. The city's population, relatively speaking, suffered less than other Poles, with the obvious exception of the Jewish population, who were selected for total extermination.

Our day at Auschwitz was complicated by the fact that the English and Dutch soccer teams had also chosen that day to visit.  All people might be equal, but we soon discovered that football celebrities are far more equal than students of history. They were led around the site as VIPs while we were shuttled back and forth, together with the thousands of other plebeians, ensuring that the young sportsmen could examine the site in peace, except for the camera crews which obstinately followed them.


We marched in silence past the torture cells, the starvation cells, the standing cells; the basement cell where Zyklone B was first used to gas Polish political prisoners and Russian POWs; the first, small gas chamber, with, just steps away, four ovens.

We saw the ramp at Auschwtz-Birkenau and the ruins of the huge gas chambers.

In the afternoon we attended specially arranged workshops, one on art from Auschwitz and the other on using primary documentation.  We saw an oath of secrecy, signed by an SS member, swearing that nothing that occured within the camp would ever be divulged to the public.

We saw files of death certificates where the time of death of prisoners was recorded down to the very minute.

We saw hundreds of photos of victims.

And we leafed through folders, hundreds of pages thick, of photo-negatives of victims. taken upon arrival at Auschwitz. 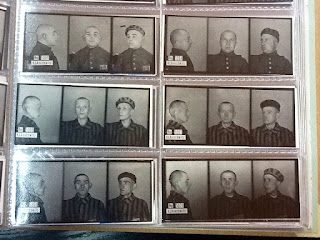 In 1943 the Nazi government liquidated the Podgorze ghetto and 8,000 Jews were moved to the newly established concentration camp of Plaszow.  These 8,000 included Schindler's Jews and it is this camp, under the command of the notorious sadist Amon Göth, which features in Spielberg's film.
One man saved by Schindler, Josef Bau,  later became a famous artist. We were lucky to visit a temporary exhibition of his work depicting life in this work camp.


There is no public transport link to Plaszow today. Tour groups don't stop there.  We hired a bus and a driver. 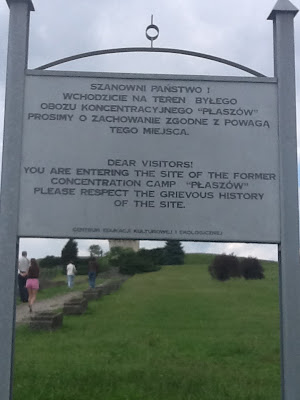 We were told that there is nothing to see there, that the place is never visited by tourists, but we insisted. Our driver just pulled off the motorway. On the day we visited there were no crowds, no football teams from EURO 2012. A few green hills overlook garish billboards, housing estates and shopping centres. At the top of one hill stands a monument. A man, dressed in a tracksuit, leaned against the monument doing stretching exercises. 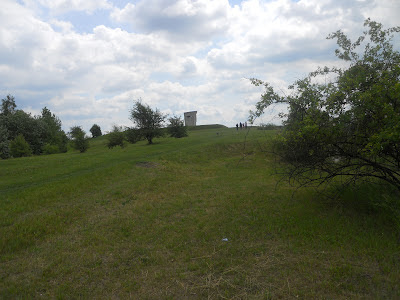 Among the trees we came across two local families picnicking with their toddlers. A jogger drifted gently past. We came across a small memorial in Hebrew and an Israeli student among us translated. Then we sat under the monument, read the poem Death Fugue by Paul Celan and contemplated the savagery of the Holocaust.


We returned to Zürich and had one day to decide how we would present our journey.  Although we had enjoyed the churches, cafes and museums of Krakow, dined well every evening and, despite being forced to contemplate the horror, as a group we had had fun.  But for our presentation we decided the solemnity was called for.  So we put together a small exhibition on the places we had seen, we made a small memorial where visitors to the exhibition could write their thoughts and hopes and students recited poetry in German, Italian and English.