Irony, fantasy and fun are words that easily come to mind when viewing the works of  Niki de Saint Phalle, like her Guardian Angel in Zurich's main railway station; but these words also describe the giant, kinetic sculptures of her husband, Jean Tinguely.


A couple of weeks ago I walked along the promenade on Lake Zurich's sunny right bank, admired Henry Moore's Sheep-Piece, but was disappointed to discover that Tinguely's "Heureka" was missing.  It had been standing here at the Zurichhorn since the 1960s, and it's not the sort of sculpture that could easily be stolen.  Some time spent distractedly searching on Google revealed that Heureka had been removed, for the first time since its installation in 1967, and loaned to the city of Amsterdam for its ArtZuid exhibition.  But that exhibition had ended nearly a year ago. What a mystery.  Then, purely by chance, I picked up a newspaper in a train a few days ago and discovered a short article describing how Tinguely's massive sculpture was in the process of being reassembled at its home in Zurich.
And so I set off, once again, along the promenade, passed the ice-cream stands and skateboarders, passed the Le Corbusier house and the Museum Bellerive.  As I walked through the maze of flowers and shrubs, there is was, silhouetted against the sky, gleaming in its freshly painted black splendor. 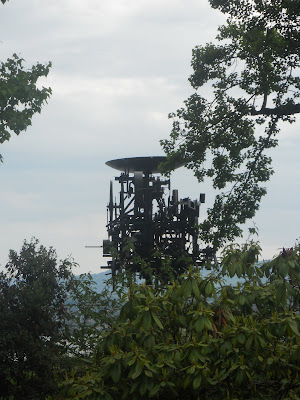 Heureka was commissioned as an exhibit at the Swiss State Exhibtion in Lausanne in 1964. It was bought by an industrialist and donated to the city of Zurich. Tinguely's kinetic works are often described as parodies of the consumerist, industrial society. The parts all move, but they  achieve nothing.  Like Facebook, the blogosphere and the frenzied  traffic of Twitter, the pieces work together, aimlessly making a lot of noise; there's a lot of huffing and puffing and loud banging. But the mountains beyond take no notice. They simply stand in their white splendor. 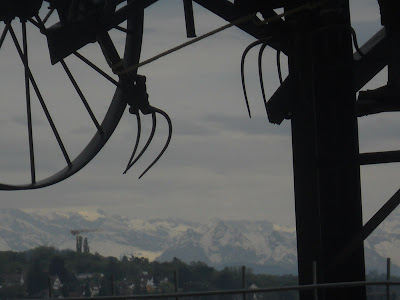 Sometimes described as a surrealist, Tinguely was certainly influenced by the Zurich born Dada art movement. At 5:00 pm every afternoon his machine comes alive and bursts into useless, Dadaist activity.

Tinguely constructed Heureka in 1962-1963. The pace of our lives has accelerated quite a bit since then. A lot of movement, a lot of noise, a continual series of Eureka moments that, for the most part, distract us from what we should be doing. As Pascal wrote: "All of man's misfortunes comes from one thing, which is not knowing how to sit quietly in a room." While poking fun at us in an ironic way, this is what Tinguely's art teaches us. 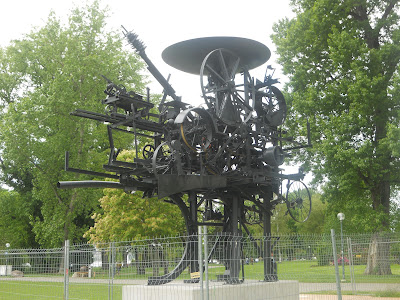