Last week I took a couple of hours and enjoyed the current exhibtion at the Rietberg Museum in Zurich, "Heroic Africans: Legendary Leaders, Iconic Sculptures".

The exhibtion was orginally in New York, at the Metropolitan Museum.  It was reviewed in The New Yorker by Peter Schjeldahl.  In the New York Times Holland Cotter wrote:

"If you still think that African art is not your thing, there’s an exhibition at the Metropolitan Museum that may change your mind (...) it’s as beautiful to look at as a show can possibly be."

I can verify, he was not exaggerating. Cotter goes on to say:


"It’s a perception changer in other ways too, as it argues, through demonstration, against basic misunderstandings surrounding this art. African art has no history? No independent tradition of realism? No portraiture? All African sculpture looks basically alike, meaning “primitive”? African and Western art are fundamentally different in content and purpose? Wrong across the board."


It certainly threw a new light on African art for me. The works in this show range from the 12th to the 20th centuries and, for the most part, are sculptures that memorialise eminent  leaders and other heroic figures in African history or mythology. One of the pieces, a wooden sculpture of a dancing priestess, caused a sensataion when it was first exhibited in 1930s Europe and was photographed by Man Ray.


The pieces are beautifully displayed in the new exhibition space that lies below the 19th century villa where Richard Wagner once carried out his love affair with Mathilde Wesendonk. 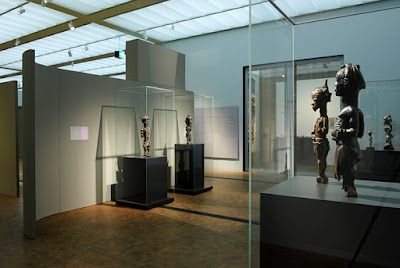 These works were inevitably made as part of a complex system of collective  memory, closely linked with religion and death rituals, providing an essential  bridge between the living and the dead. But they stand today behind glass vitrines, far from home, to be enjoyed for their purely aesthetic pleasure alone, by New Yorkers and Swiss. The works come from the Rietberg's own collection, as well as from collections in Belgium, Britain, France, Germany, Portugal and the United States. None, of course, have a home in Africa anymore. That ravaged continent long ago lost its most precious works to the predatory colonizers of Berlin, Brussels, Lisbon, London and Paris. If anyone, African or otherwise, wants to contemplate some of the finest sulptures created in Africa, they will have to travel to Zurich.

I was particularly moved by a small number of Yoruba terracotta faces, from Ife in Nigeria, made some time between the 12th and 15th centuries.  They looked incredibly fragile but lifelike; their remarkable individualism and naturalism predates any contact with Europeans.

Some sculptures from the 17th century onward border on the abstract. It is easy to see how such works would entice and excite the likes of Picasso and Kirchner.


We don't know the names of the artists who created these great works. Thanks to the destruction wrought by colonialism, we have lost a great deal of the stories that provide the context of what these works originally meant. Most of all, perhaps, for ages Europe's sense of superiority blinded us to the individuality and beauty of African art. Even those, like the artists of the European avant-garde, who were truly inspired by African art, could only find in it a dynamic form of primitivism - it provided an escape from the industrialised and mechanised landscape that surrounded modernity.  This exhibition reveals the manifold brilliance of African art.  We may not know the stories, but we can stand in awe.