While recently walking back to the Left Bank by way of the Pont de l'Archevêché in Paris I was surprised to find the railing of the bridge festooned with thousands of padlocks. Paris is supposed to be the city of love, but this is a relatively new addition to that reputation.  Just under the tower of Notre-Dame, on the little bridge that links the Ile de la Cite with the Left Bank, lovers inscribe their names on a lock, fasten it to the railing of the bridge, and then toss the keys into the dark Seine. 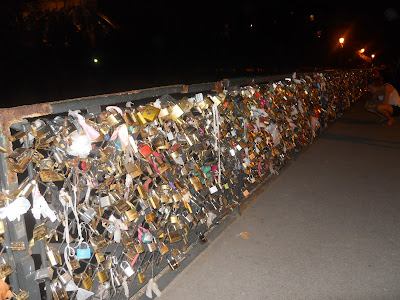 It's a way of declaring love, a romantic gesture and, perhaps, an attempt at gaining immortality. Whatever happens in the future, our love-lock will always remain, and our names will always be entwined on a bridge in Paris. 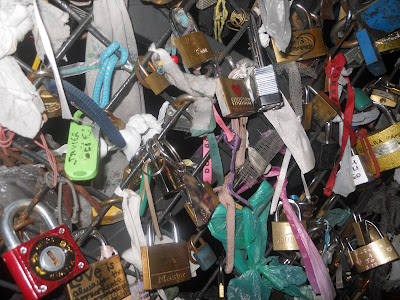 I can't help but smile at the simplicity of the gesture.  Apparently the authorities have tried to quash this habit, but have had give in to public pressure - people's power.  Yet the symbolism of using a lock to express your love is ambiguous. In fairy stories, a door that is padlocked implies something that is hidden, even forbidden.  And of course, humans being humans, we are irresitibly drawn to the forbidden, often with fatal consequences. Bluebeard kept a chamber of his castle under lock and key and warned his wife never to venture into the forbidden space.  Of course one day she did, to find the bloodless corpses of his former wives.  Terrified, she realised her mistake, but too late; she had fallen into her husband's morbid trap and and quickly, horrifyingly, met the same fate as her predecessors.  According to Jungians, Bluebeard represents the animus or male personification within woman - in the words of Jungian pyschoanalyst M-L. von Franz, Bluebeard "personifies all those semiconscious, cold, destructive reflections that invade a woman in the small hours, especially when she has failed to realize some obligation of feeling."  Hmmmm. Let me just say, I'm not a Jungian.

On the other hand, we keep things under lock and key in order to deny change, which denies growth.  A love that is kept under lock and key is a love which is bound to putrify and die. Didn't the medieval crusader lock his wife's forbidden zone in a chastity belt, in an attempt to deny entry to others into his property. To be locked in, has all sorts of stifling connotations. Neil Young once sang "You lose the word love when you say the word mine".  Well these days plenty of young lovers in Paris are shouting to the world "He or She is mine forever".

Keys without the locks have all sorts of meanings in western art.  An old man with a key, or a set of keys, is probably St. Peter with the keys to heaven, or he might be a prophet or simply a member of the church who carries the key to salvation; a bird with a key in its beak usually symbolises salvation.

A famous example of the lock and key as a sacred symbol is found in the Merode altarpiece from the early 15th century Flemish artist Robert Campin where the door represents the entrance to heaven, the lock represents charity and the key the desire for God.

The locks that now grace the bridges of Paris in the vicinity of Notre-Dame are certainly not altarpieces, but they do have something ritualistic about them.  On the one hand we have the great cathedral providing the ancient symbol of a religious faith of a bygone age; on the other the spontaneous gesture of the locks demonstrating a symbol of contemporary profane love. I wonder which will last longer.

Email ThisBlogThis!Share to TwitterShare to FacebookShare to Pinterest
Labels: Paris