Delacroix's painting "Liberty Leading the People" is much reproduced, though it has come to be wrongly associated with the French Revolution of 1789. Half woman, half Goddess, with a tricolor in one hand and a gun in the other, a Phrygian cap on her head and her breasts bared, Delacroix’s creation embodies the Liberty in whose name the revolution of 1830 had been fought. She stands at the centre of a pyramid, leading the people towards their freedom, while at the same time evoking the memory of the radical First Republic, which had been founded in 1792 and had chopped the head off a king and a queen.


The painting was bought in 1831 by King Louis Philippe who had been brought to power by the revolution of 1830.  Alas, the Citizen-King, Louis Philippe, turned out to be a major disappointment and as his regime became more oppressive, and as the number of attempts on his life increased, he decided to distance himself from revolutionary ideals and Delacroix’s painting was quietly removed from view and locked away for a decade and a half. 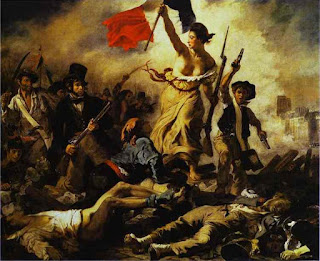 In 1848 Louis Philippe himself was overthrown in a revolution.  Louis Napoleon was elected President of the new republic.  He found Delacroix’s “Liberty” and it was proudly hung in public again, now that Freedom was back on the throne.  But when Louis Napoleon carried out a coup in 1851 and crowned himself Emperor in 1852 Delacroix’s "Liberty" was once more considered to be a liability and was locked away from public view. When Louis Napoleon, now known as Napoleon III (or “Napoleon the Little” as Victor Hugo bravely called him) was overthrown in 1870 Delacroix’s "Liberty" was again taken out of the basement and exhibited for public viewing.  She is still there, hanging in the hall of 19th century French paintings in the Louvre, admired by thousands of international museum goers every day.  Who knows what sort of message she sends to Chines tourists, and visitors from other dictatorships.

Another work by a French artist is the Statue of Liberty, designed by the Alsatian sculpturer Frederic  Auguste Bartholdi in 1886, and presented to New York to celebrate the centenary of the French Revolution.  But this famous symbol of Liberty has been somewhat tamed.  Gone is the Phrygian cap, replaced by a saintly halo, and gone is the gun.  Most obviously gone are the bare breasts.  This is no violent Amazon leading a violent and radical revolution, but a steady, modest matron, holding aloft the light of enlightened progress while grasping a stone tablet that says: “4 July 1776”. 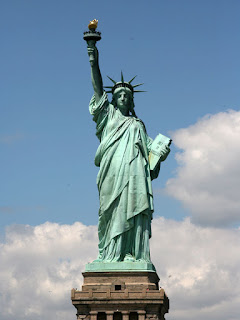 In 1989, two hundred years after the first great French Revolution, spring came early to Beijing and hundreds of thousands of democracy demonstrators filled the gigantic Tiananmen Square.  In late May some students from the art academy erected a statue to Liberty, made of plaster, wire and styrofoam. She became known as the Goddess of Democracy.  Chinese authorities leapt to the conclusion that she was based on New York’s Statue of Liberty, and this was proof, if proof was needed, that the student demonstrations were an American intervention in Chinese affairs.  In fact the work is made in Social-Realist style, almost Stalinist in its form, reminiscent of the type of art that had been approved during the years of Mao Zedong.  Alas, within a few days the square was the target of a military assault, the statue was destroyed, its makers slaughtered or imprisoned. Only a few photographs of the Chinese Goddess of Liberty remain.  Some day, perhaps, like Delacroix's liberty, she will be revived and one of her photographs will adorn Tiananmen Square. 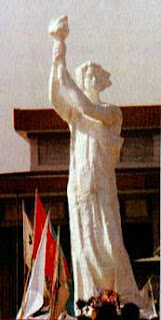 This post has been inspired by my reading of Peter Burke's Eyewitnessing:The Uses of Images as Historical Evidence. Cornell University Press, 2001