I won't be posting anything during the rest of the week as I am off to Istanbul on a study trip with some students tomorrow and will be there all week.  In the meantime: This is the second part of a walk through revolutionary Paris. Part One appeared Friday.

The most famous victims of the French Revolution were the Royal family, and in January 1793 King Louis XVI was beheaded and his wife Marie Antoinette followed him to the guillotine in October of the same year. The Royal couple had managed to survive, more or less intact, the first couple of years after the outbreak of revolution in 1789.  But in August 1792 that ended with the Storming of the Tuileries.  The royal family barely escaped with their lives as their palace in Paris was ransacked and their soldiers of the Swiss Guard were massacred. The Tuileries Palace used to stand in the huge park of the same name that today adorns Paris just outside the Louvre. But if you look hard enough you can find maps of the old palace and discover where exactly it once stood.  The photo below shows two students giving a presentation on the storming of the palace, and where they are standing would once upon a time have been directly outside the main entrance. 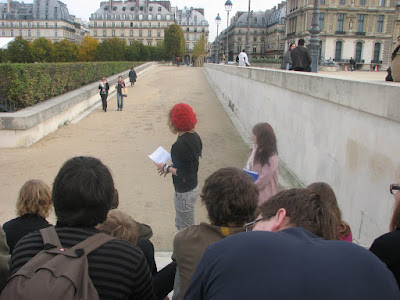 From this point on in the revolution, the monarchs and their children were most decidely prisoners.  Many tourists visit the Conciergerie, where the queen spent her last night.  But the entire family was imprisoned for many months in a place called the Temple, and it was here that the king spent his final night. My students and I sought out the site where the Temple once stood. We first spotted the Cafe La Tour du Temple, pictured below, so we knew we were close. 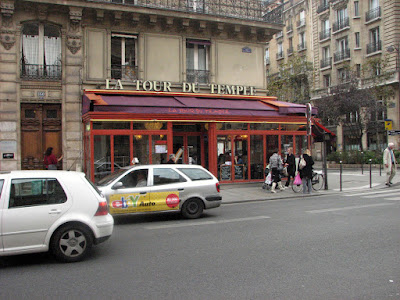 Eventually we discovered the place where the Temple once stood, originally the headquarters of the medieval Knights Templar.  The outline of the former building has been painted on the street. In the photo below you can see two students give a presentation on the fate of the royal family. The blue paint on the ground marks the tower in which the family was held. It is an uncanny feeling, to be standing where they once stood, despite the absence of the building itself. It demands an important quality of the history student, historical imagination. 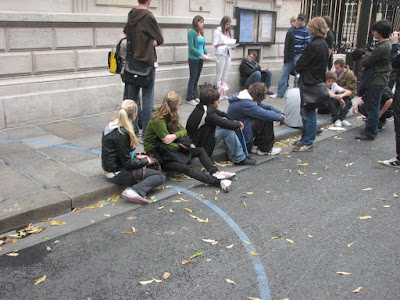 The wonderful Museum Carnavalet, the Museum of the History of Paris, has a delightful collection of artifacts from the revolution, the largest such collection in the world. A small room is dedicated to the royal family, including the miniature billiard table and furniture in the photo below. These belonged to the young child prince while he was imprisoned along with the rest of his family in the Temple. 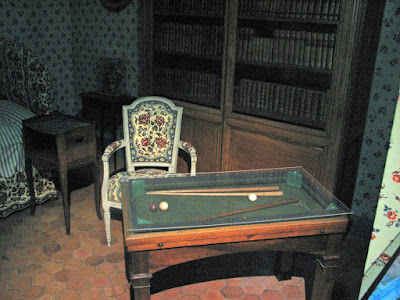 And here are three lockets containing hair of the unfortunate king, queen and their young son. 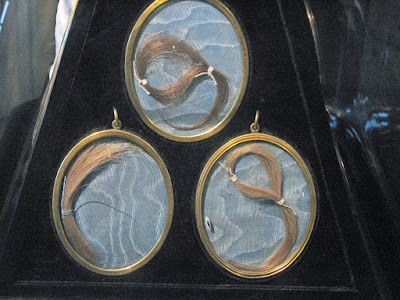