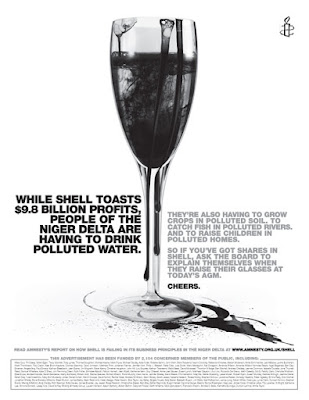 Amnesty International bought a page of The Financial Times last week in order to carry the above advertisement.  On May 18th the annual shareholders meeting of Royal Dutch Shell was due to take place in London.  The oil giant's profits were 9.8 billion dollars, which must make for happy shareholders (though not happy workers - they have announced that they will sack 6,000). However, Shell's behaviour in the Niger Delta has been criticised by environmentalists and human rights activists for years.  The people in this area of Nigeria live in a region which is an ecological disatster. Every year they cope with Shell's oil spills that compare with the famous BP spill that is currently causing so much outrage off the Louisiana coast. But Shell's assault on the environment takes place among the world's poorest people, far from the world's media.

The plan was that on May 18th Amnesty's advertisment would appear in a number of British newspapers, reminding the shareholders of their responsibilty.  At 4:58 p.m. on May 17th The Financial Times called Amnesty headquarters in London to say that they had changed their minds and were refusing to run the advert. Of course this has resulted in more publicity for Amnesty's Niger Delta campaign and has clearly revealed the cynicism of The Financial Times.  For more information on how the Niger Delta has become (S)Hell on Earth try visiting Amnesty's campaign website
Posted by P. M. Doolan at Tuesday, May 25, 2010