A Stroll in Richard Wagner's Zürich 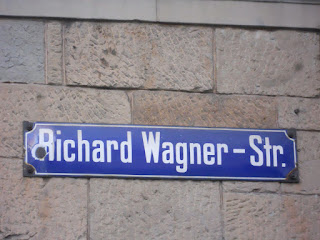 Strolling through Zürich's old town late the other evening I photographed a number of places associated with the great Richard Wagner during his stay here from 1849 to 1858.

Wagner fled, a political fugitive, from Dresden, the capital of the Kingdom of Saxony, and spent his first night in what was then the Hotel Schwert, pictured below. 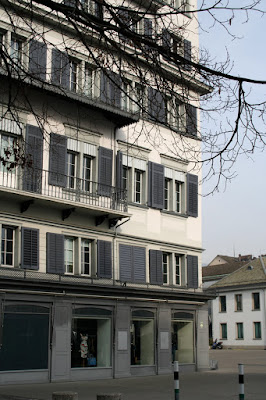 The hotel had a long history, going right back to the 14th century.  Down through the ages its guests had included Montaigne, Casanova, Mozart, Goethe, Napoleon III and Victor Hugo. Today it is the home of Dolce and Gabbana and carries not even a plaque to commemorate any of its earlier visitors, nevermind Wagner.


He lived for about nine months on the bottom floor in this house: 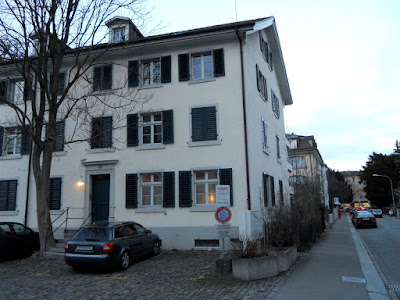 He spent most of 1850 living just outside the town centre in the suburb of Enge.  The building he lived in then is long gone, but it was close to this sign: 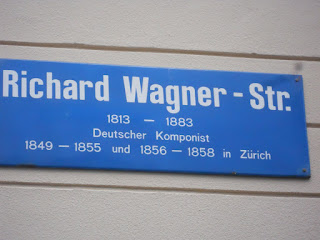 It was here that he penned his infamous anti-semitic tract The Jew in Music (Das Judentum in der Musik) and worked on the poem that would become Götterdämmerung. 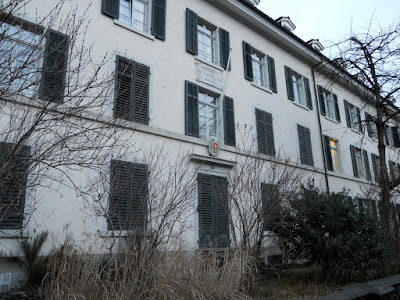 Today it houses the Portugese consulate, but just above the flagpole you can find a plaque that remembers Wagner's time here. 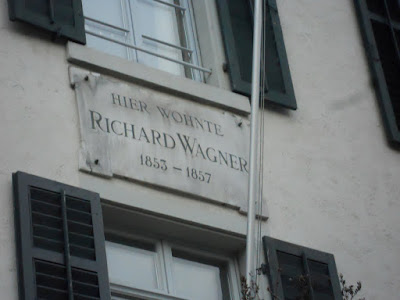 It was in this building, where sometime later Johanna Spyri, the author of Heidi, would live, that Wagner worked diligently on The Ring of the Nibelung (Der Ring des Niebelungen).  By 1853 he had finished the poem that would become the libretto for the 15 hour long opera.  On four consecutive evenings he would read the entire poem to invited guests at the prestigious Hotel Baur au Lac, pictured below: 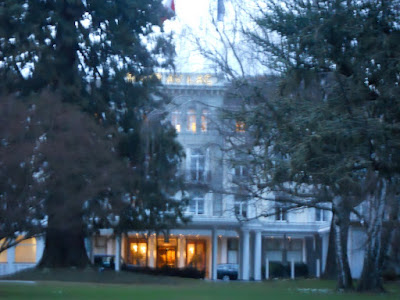 One memorable evening in 1856 an invited audience at the Baur au Lac enjoyed the first ever performance of the first act of Die Walküre, with Franz Liszt playing piano and Wagner himself singing.

Throughout these years Wagner was a frequent visitor to the music store Hug, which is pictured here: 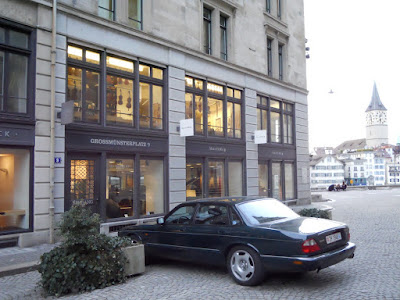 and the nearby bookstore that published some of his shorter prose works, Schultess: 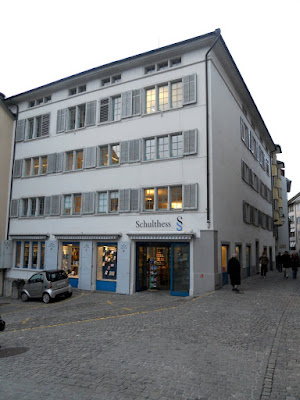 In 1857 Wagner and his wife were offered lodgings by his benefactor Otto Wesendonck in this house in the suburb of Enge: 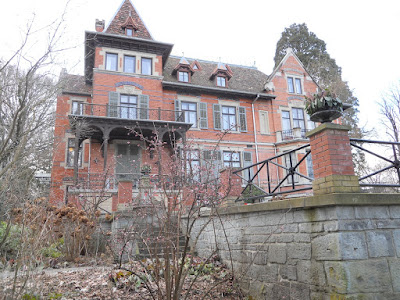 The house underwent major renovations in the late 19th century - it was far smaller in Wagner's time.  Nevertheless, this was almost heaven on earth for Wagner.  Here he had the peace and quiet to allow him to compose undisturbed and, another advantage, this was the view from his house:


The view, as you can see, looks onto the neighbouring house, the Villa Wesendonck.  Here lived Wagner's benefactor Otto, who combined being rich and generous with having a young and beautiful wife, Mathilde.  Wagner was in love with Mathilde and Mathilde in love with Wagner, and their close proximity made for a heavy brew during the next one and a half years.


Wagner now gave up work on The Ring and began composing Tristan und Isolde, which contains many of his sublimated feelings for Mathilde.  He would compose in the morning and then run over to Mathilde's villa (above) to play for her what he had just created.

This couldn't go on forever and Wagner's marriage reached crisis point in August 1858. He left Zürich in disgrace though he did return to visit the Wesendoncks a number of times.

There are of course many more sights in Zürich that would interest the Wagnerite, but only so much can be taken in during a leisurely evening stroll...