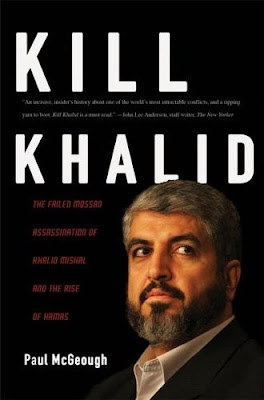 Those who take an interest in the Middle East can be forgiven for feeling a gradually growing sense of déjà vu as revelations concerning the killing of Hamas leader Mahmoud al-Mabhouh in Dubai continue to unfold in the international media. It seems certain that this assassination was executed by the Israeli secret service, the Mossad, possibly with help from anti-Hamas Palestinians. The sense that we have been here before stems from the similarities with the Mossad’s failed attempt to kill Hamas political leader Khalid Mishal in Jordan in 1997 as described in Australian journalist Paul McGeough’s Kill Khalid: The Failed Mossad Assassination of Khalid Mishal and the Rise of Hamas. McGeogh’s excellent analysis of the birth and growth of Hamas, with the failed assassination attempt on Khalid Mishal as its centerpiece, appeared in 2009 and the paperback was released this week - almost uncannily appropriate timing. I highly recommend the book if you are at all interested in Israel and Hamas.


In 1997 the new prime minister of Israel, Benjamin Netenyahu, decided to have the political leader of Hamas, Khalid Mishal, killed in Jordan. But Jordan had just signed a peace treaty with Israel and was one of Israel’s few friends in the neighbourhood, so the Mossad had to kill Mishal using a method (slow working chemical poisoning) by which it would seem that he died of natural causes. To make a long story short (something extremely difficult for me to do), the attempt failed and it caused a major international diplomatic crisis. Within hours of the bungled assassination attempt Israel’s top priority swung from wanting to kill Mishal to wanting to save his life as he struggled in hospital close to death. Such was the seriousness of the diplomatic fallout that nearly half of Israel’s government ministers piled into one helicopter (what a risk to national security that was) and flew in top secrecy to a farm in Jordan for an emergency meeting with the Jordanian top brass. And such was the anger of King Hussein of Jordan that he deliberately forgot his renowned hospitality: as McGeough tells it “even though the prime minister of Israel had flown into the night to see him, such was Hussein’s still incendiary anger that he chose to have no part in this visit, quite calculatedly snubbing Netanyahu… When the Israelis straggled into the farm, they were not invited indoors. They were offered nothing to eat, not a bowl of nuts, not even a drink.” Canada was outraged when it was revealed that the would-be assassins had used Canadian passports. (McGeough explains how Mossad makes use of stolen identities.) Within days Bill Clinton was forced to receive a top ranking Jordanian delegation in the Oval Office and he acquiesced in their demands.

The Jordanians, determined to ensure that a foreign government would no longer attempt to act with impunity on the streets of Amman, exacted painful concessions from the Israelis. Danny Yatom, the head of Mossad was forced to resign and dozens of Hamas activists imprisoned in Israel were released. Most humiliating of all for Israel was being forced to release the notorious Sheikh Ahmad Yassin, the paraplegic founder and spiritual leader of Hamas. (They managed to kill him in Gaza with a rocket attack in 2004.) This, as McGeough puts it, “ was the massive price Israel was forced to pay for the rush of blood to the head that had made Benjamin Netanyahu think he could pull off an assassination in the streets of Amman”.

Netanyahu’s failure ensured that Hamas became keys players in the Middle East. Few had heard of Mishal before this time; now he was transformed into an iconic leader of Islamic and Palestinian resistance, a position he still retains. Today he leads the struggle from his headquarters in Damascus.

Once again Benjamin Netenyahu is prime minister of Israel. Once again it seems that he has ordered an assassination. Once again Israel has chosen another friendly Arab state, the United Arab Emirates, as the place to eliminate an enemy. Once again there are loud calls for the resignation of the head of the Mossad. Once again the operatives used stolen identities, much to the chagrin of the British, Irish, French, German and Australian governments (but they avoided Canadians this time round). And once again, the operation was done in stealth – no shooting in the streets or bombs exploding; suffocation rather than slow working chemicals was the choice this time. Just like in 1997 a moderate Arab state is calling foul, western powers are expressing their outrage and there are demands for resignations.

But history, despite popular notions to the contrary, rarely repeats itself. This time few in Israel are demanding resignations. This time the assassins were safely out of the country by the time Dubai woke up and found a suffocated corpse lying in a bed in an expensive hotel. This time Israel succeeded.
Posted by P. M. Doolan at Friday, February 26, 2010