Millions of people will be seeing the newest blockbuster movie Avatar - a story of corporate greed, as humans destroy nature and kill others in order to acquire expensive resources.  But it is all just fantasy, right?  If only.  Human greed has already caused the extinction or near extinction of hundreds of species.  But Avatar reflects the behaviour of many corporations plundering the resources of the Democratic Republic of Congo, where over four million people have been killed since 1996 in the biggest war on our planet since World War Two.  This war is partly fueled by the need to mine coltan, an element that forms an essential part of your laptop and mobile telephone.  Avatar is comparable to the behaviour of Shell in the Niger Delta but it is even more reminiscent of the behaviour of Chevron-Texaco in Ecudaor, as portrayed in the documentary Crude: The Real Price of Oil.  For the fictional Na'vi people in Avatar read the very real Eywa people in real life Ecuador.  At the annual World Economic Forum in Davos Switzerland in 2006 Chevrolet/Texaco won the Public Eye Award for being the company with simply the worst environmental behaviour in the world, examplary in her social irresponsibilty, because the company has knowingly created a fatal disaster zone in Ecuador.  Public Eye invited Jennifer DeLury Ciplet, Managing Director of Amazon Watch, to give the speech to explain why the company had been chosen as the "winner".  She said:

"For more than thirty years, from 1964 to 1992, the oil company Texaco knowingly and systematically dumped 70 billion liters of toxic waste into rivers, streams, wetlands, and unlined waste pits in the northern Ecuadorian Amazon. This environmental and human catastrophe became Chevron’s responsibility when it bought Texaco in a US$45 billion merger in 2001.


Over the years, the toxic contents of Texaco’s unlined waste pits have leeched into the groundwater, streams and rivers of the Ecuadorian Amazon, contaminating the larger ecosystem and sending toxins downstream into Peru. Today, 627 open toxic waste pits remain, some of which are the size of a soccer field. These waste pits continue to leak highly toxic cancer-causing waste into the ground, poisoning the land and water where more than 30,000 local people live. Local residents have no other option but to use these contaminated sources for drinking water. Thousands of people are slowly being poisoned daily as they consume the water, bathe in local waterways, and breathe the vapors in the air from the waste pits.

Chevron’s operations have resulted in an exploding health crisis. Childhood leukemia rates are four times higher in this area than in other parts of Ecuador...The effects of Chevron’s “Rainforest Chernobyl” have been especially devastating for the indigenous communities... Since Texaco began its operations, one tribe—the Tetetes—are now extinct, and the land that other indigenous communities once depended on for subsistence is now so polluted that tribal members have had to abandon these ancestral areas... 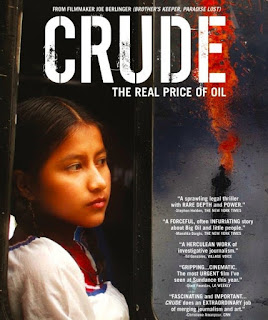 Perhaps the most offensive part of this story is that this catastrophe was not an accident—it was the direct result of the company’s decision to prioritize short-term profits over people’s lives and the environment. To further increase profits from its operations in Ecuador, the company deliberately decided not to use re-injection technology, which was a standard industry practice at the time. Re-injection technology disposes the toxic byproducts of oil drilling hundreds of feet back into the well cavity, and is a better environmental option than not re-injecting the toxins...
However, there is an important sign of hope. Today, Chevron is facing a historic class-action lawsuit in Ecuador. Brought by five indigenous groups and 80 communities representing 30,000 people, this lawsuit has the potential to set a precedent that could benefit millions of people worldwide who have been victimized by private corporations. This lawsuit represents the first time in history that everyday people in the Third World have forced a multinational oil company to submit to jurisdiction in their national courts on environmental grounds."

The Worldwatch Institute in Washington first made the link between Avatar and Crude: The Real Price of Oil, with clips from the trailers of both films:   Avatar Meet Crude
Posted by P. M. Doolan at Thursday, January 14, 2010